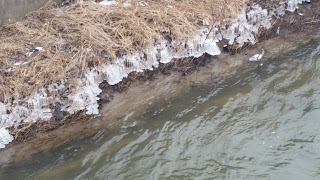 On March 2, 1986 the future Mrs ERJ and I went canoeing on the Red Cedar river. We had been dating each other exclusively for about three months.

The temperature was about 31F.

The four days before our adventure, there had been a heavy rain.

Then, as the river fell, the night-time lows were in the high-teens with day-time highs approaching the freezing mark.

Every root, stick and grass stem looked like upside-down wine flutes or ballerinas. In some places, the roots had multiple flutes: Champagne flutes at the top, white wine tulip in the middle and a stout brandy snifter near the bottom.

A skin of ice froze on the surface near the end of the chilly nights. Then, during the warmth of the day, the river dropped and the horizontal plane drooped everywhere except where it was anchored to a root, stem or vertical plane.

The end of the story had some kind of moral, although I am still trying to puzzle it out.

On the way back up-river, we ran into rapids just above the Kellogg Center. We tried to paddle our way up them twice.  Our third effort involved backing up so we could build up speed crossing a deep, still pond before hitting the rapids.

We ALMOST made it. We were paddling like dervishes when my paddle disassembled itself and the ferrule that joined the two haves of the kayak-type paddle went spinning into the drink.

Rapids are shallow. Everybody knows that. We were dead in the water until I retrieved the ferrule that joined the two halves of my paddle.

I rolled up my pant legs and waded into the rapids to find the missing piece.

As expected, it was not quite knee deep.

And there it was, the bright, shiny, turned 6061-T6 aluminum ferrule, whirled and whelmed by the current. Caught by a rock, then, after wiggling in the current, breaking free and making another short dart until caught by the next rock.

If you make a critical study of the fluid dynamics of rapids and pools and study the natural sorting of aggregate along the bottom, you learn that at the tail-end of the rapids where the high velocity current jets into the deep pool, there is a sharp shelf comprised of spherical, greased, egg-sized gravel.

The first thing I heard as my head popped back into the air was the silvery tinkle of the future Mrs ERJ laughing. LAUGHING!  She thought it was funny.