Setting up the ambush (fiction)

The teams that blew the bridges over Doan Creek and the West Branch had to make many decisions. Which bridges? In what order? Simultaneous or sequential.

A crew of workers can quickly fall into a rhythm or it can stumble along for months.

Milo had experience with new crews. He started them off slow. He talked them through their roles.

The sentries figured out that they had to be a full half-mile away from the trucks to have any hope of hearing infiltrators.

The slow pace had an advantage. The kicker pump had no problem keeping the water cubes full.

Milo had his own problems. The hydro-drill could handle fist-sized rocks but not rocks the size of basket balls. Several times, Milo had to restart a hole. One time he tried three times and still was not able to reach the required depth. The team double-charged the shallow bore-hole to compensate for the non-optimal position.

People who build seawalls have a little bit of experience with explosives.

On the drive out, Milo and Gimp decided to set all of the explosives to destroy the bridges crossing the West Branch first and to use timers to blow them simultaneously, or nearly so.

If they could only achieve one defensive line, then the West Branch was the best choice because Wallace Road crossed over the freeway four-hundred yards west of the spans, giving defenders elevated shooting positions at a perfect distance from the bridge.

Using timers to blow the bridges at the same time seemed less likely to arouse interest which might interfere with their operation.

That was not much of an issue on the less occupied south end of their operations but the northern fringe was completely un-pacified. The roads were impassible and kidnappings were a real and constant threat.

Fortunately, Tomanica had anticipated the need and Milo had thirty fully charged car batteries in the back of his truck to energize detonators.

A second truck followed them in case of break-downs and to carry extra gear and team members.

The team started with the bridges closest to I-96. They set the charges to blow at 2:00AM

After blowing the bridges crossing the West Branch (less the spans that carried the freeway), they drove west to Doan Creek and blew the the spans crossing it, including the ones carrying I-96.

Then moving south from the freeway they set charges for the other bridges. They set the timers for 7:00 AM

They knocked out 17 of the 18 bridges on the list.

One road over Doan Creek was left unmined. Columbia Hwy was a modest and unprepposessing dirt road where it crossed Doan Creek. From that bridge, it ran due west and straight into Capiche.

By daybreak, Milo, Gimp and twelve Capiche fighters were in two firing positions on the west side of overpass carrying Wallace Road. They took the precaution of burning the tall grass alongside the freeway from Wallace Road east. The fire moved very slowly in the dew drenched grass. Capiche was ready to repel any Livingston County forces as they would ever be.

There were two more fire-teams positioned north and east of the spans that used to carry I-96 over Doan Creek. They did not have the benefit of elevation. 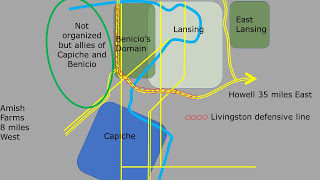 There were only three places in the twelve-mile Livingston County line where liquid water was readily available. The Grand River at mile markers 91 and 98 and Bishop Pond at mile 101.

Chernovsky had snipers set up before dawn to ventilate any men venturing away from the line to collect water.

Three of the roving quick-reaction battle-groups left the line shortly after breakfast. They headed south, into the heart of Capiche.

Chernovsky had little doubt where they were going. In retrospect, Kate’s predictions seemed all too obvious.

In the absence of the ubiquitous motors of 2020, sounds travel a long way. The deep “boom” that seemed to resonate forever carried the eight miles as various sections of roadbed were detonated.

The staccato of distant, small arms fire came from the same direction.

Away from the battles, civilians continued to harvest corn and dig potatoes. Regardless of the outcome, winter and hungry times were coming.

There were hardly any casualties. Yet.

By eleven in the morning, more of the Livingston County forces were trying to reach the river.

After killing a dozen, thirst-crazed soldiers, they Livingston County forces got smarter. They crept up the median, shielded from Capiche on one side and Benicio's forces on the other.

Chernovsky asked for, and got, volunteers. They inserted into the median a couple of miles west of the end of the line and belly crawled their way to the river.

Chernovsky gave them strick orders "Shoot the buckets after they fill them."

The high velocity bullets hit the water-filled buckets and split them from top to bottom, rendering them both unusable and unfixable.

People dipping water from the Grand River at mile marker 98 were harder to hit but Chernovsky still had snipers set up to shoot any buckets that were exposed. They didn't get nearly as many as the western team but they were able to destroy a few of them.

Scouts brought word to Chernovsky that Livingston County forces were digging holes in the ditches lining I-96 where cattails were standing.  "Do you want us to start sniping them?"

Chernovsky leaned back. "Nope. If they want it that bad, they can have it." Chernovsky knew from painful, first-hand experience when naive digestive systems are exposed to dirty...very dirty...water.