For when it all goes in the toilet (fiction)

Lieutenant Martens called ‘Corn Dog’ over to the Chevy Tahoe that Martens was driving.

“You must have friends in high places.” Martens commented. Of course, Martens knew the entire back-story but he had to pretend that he didn’t.

“Supposedly, you asked for ammo. Well, here it is.” Martens said.

Corn Dog picked one up. It felt light, even for an aluminum GI magazine. He quickly shucked out the rounds. “There are only ten in here?”

“Yup. And you are damned lucky to get that many.” Martens said.

Martens wondered about Corn Dogs naivety. “Torvalsen confiscated every round of ammo in Livingston County. There weren’t as many rounds of ammo that everybody thought there would be. Ten is your total load-out” Martens said.

Martens knew for a fact much of the ammo had not been turned in. He had helped a few family members brick in raised hearths and had helped seal thousands of rounds of 5.56mm and 9mm in PVC pipe and lowered the waterproof vaults into septic tanks.

Corn Dog grimaced. “This isn’t much to work with” he said.

Martens hated Richards with a passion. He cheered as much as anybody when he heard that Richards had been humiliated in front of Torvaldsen. Most NCOs he would have let dangle but he didn’t see any reason with Corn Dog.

“If it were me...and this is not an order...I would figure out which ten rifles were in the best shape and which ten shooters you trusted most. Then I would burn three rounds to sight them in at 25 yards.” Martens said.

Corn Dog nodded. “Ten good shooters with seventeen rounds is better than everybody with seven. Gotchya.”

“What are we doing here?” Timmy Scappazo asked with withering sarcasm.

Timmy was clearly uncomfortable outside, away from the buildings. It would have been funny under other circumstances.

“We are picking fall-back positions and marking trails that need to be cut.” Corn Dog explained.

Shepler, the senior NCO blanched. “We don’t have orders to do this.” he gasped.

Shep did a lot of gasping. He had Chronic Obstructive Pulmonary Disease and had raised moving slowly to a fine art.

“I don’t care how good a defensive position is” Corn Dog announced. “It is a death-trap unless there is a way to extract while making the other side bleed.”

“Maybe so” Shep retorted “But we don’t do ANYTHING without orders.

“So what are you going to do if leadership does order it?” Corn Dog asked. “You gonna tell them, ‘Yeah, I thought about it but figured you were too stupid to order us to do that?’ or are you going to say 'Yessir. We have firing positions six hundred yards out and we are on our way.’?”

“How the hell do you know all this stuff?” Timmy asked.

Timmy wasn’t convinced but the other men bought it. The thing was, Corn Dog was always so certain. It wasn’t as if he had read two sides of an argument and decided who had the slightly better case. Nope. Corn Dog always knew what the slam-dunk, right answer was.

Corn Dog was 99% certain the food warehouse would not be attacked from the west. He had traveled the country west of here and there was no organized government until you hit Capiche and Delta Township where Benicio was. They had too much on their plates and not enough fighters to engage in offensive maneouvers. Ergo, there would not be an attack from the west. 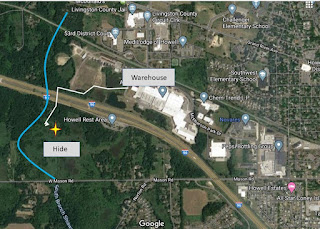 The bulk of Howell and the Livingston County forces were north and east of the warehouse. Any attacker worth his salt would swing below the defenses and stab upward, into the soft belly of the beast. That meant Corn Dog expected the main thrust to come from the south.

Attackers would expect the defenders to retreat to the north and east. Unfortunately, the attacking force would then be shielded by the buildings and the other clutter of suburbia.

The more aggressive counter attack would be to swing west of the attackers thrust and reinsert behind them. The attackers might be prepared for such a move from the east because of the center-of-gravity of the Livingston County forces. In all likelihood, they would be taken completely by surprise to find themselves taking fire from their left-rear.

Corn Dog did not have much to choose from in terms of terrain. The South Branch of the Shiawassee river did not boast much of a valley so there was no marked cusp to the limits of the flood plain. There were trees, however.

Corn Dog had the men cut the logs into four foot lengths and used them to enhance the little “cusp” that existed. In passing, he told Urdie “The difference between cover and concealment is that cover will stop a bullet while concealment won’t.”

“It is a lot easier to be unlucky hiding behind concealment rather than cover. And if somebody is shooting at me, I don’t want to have to count on luck” Corn Dog continued.

Corn Dog had them place the four foot sections with one foot gaps between them _ _ _ _.

“Now don’t be shooting over the logs” Corn Dog cautioned. “The people shooting back won’t be aiming a foot above the ground and even if they were the logs will stop most of them. You lay your rifle across the tops of the logs and start shooting...well, you might not be so lucky.”

The last thing the team did before heading back was to fill water jugs from the Shiawassee river and treat the water with bleach.

Timmy groused about the extra work. “This is pointless. Nobody will probably ever drink this water. And if we do use this fort...which I doubt...we can get water from the river then.”

Corn Dog gave him a look that shut him up. “If you are thirsty and you have hostiles a hundred yards away, the last thing you are going to want to do is to sashay down to that river to get a drink.”

Timmy didn’t have much to say after that.

What Corn Dog did not share was that Capiche was due west along Mason Road and the hide was at the very fringe of Livingston County's reach.