Sometimes a hammer is the right tool (fiction)


General Mark Richards was in his converted UPS van/mobile-office at 10:00:05 when mortar crews started dropping rounds down the tubes. He was filling out the reports that populated Thorvaldsen’s “dashboard” and he was taking pains ensure the data was not contradictory. That is the problem with making up data, it doesn’t always agree.

Chernovsky had the mortars arranged in three teams of three. The Capiche-standard mortar threw an air-fuel round approximately 660 yards. The round held 14 ounces of fuel, a dispersal charge and a fuze. Benicio's "suddenly" finding an abundance of potassium nitrate unplugged the bottleneck that had been restricting mortar ammo availability. Capiche now had hundreds of rounds of ammo.

Winds were a gentle 4 mph out of the southwest. Air-fuel explosives, aka hyperbaric rounds, are synergistic. A pressure pulse from a single round out in the open disperses quickly and has a limited sphere of destruction. Blanketing an area with ten rounds or more rounds and detonating them simultaneously is like the hammer of Thor smacking the ground. There is no place to hide.

A multi-round volley followed by an ignitor round is not effective when the fog of fuel is rapidly dispersed by the wind. That was not going to be a problem today.

The center crew was tasked with first hammering General Richards’ command post and the administrative units clustered around that command post.

The other two crews were tasked a mile to either side of the center crew. They were tasked with putting the smack-down on the roving armor units for those sectors. It was not a coincidence that the armor units were also the command centers for General Richards' Lieutenants. They thought armor was the safest place to be.

But today the armor units were not roving as the exhausted, dehydrated soldiers clogged the pavement like some many ants as they struggled to find their new fighting positions.

The first eleven “incoming” were not impressive. They detonated thirty feet above the ground. A great deal of effort had gone into coming up with a system that detonated the rounds well above the ground. The contact fuze was good enough for its time, but too much fuel was painted on the ground or on obstacles. There was too much opportunity for the detonation front to fizzle.

Janelle and Dmitri collaborated. The winning combination was a triad of optical sensors around the fuze and a pulsing “arming” laser. The laser passed through a set of lenses that fanned the beam outward twenty-five feet for every hundred yards of range while increasing the thickness of the fan one foot for every hundred yards. At six hundred yards, the arming field was 150 feet wide and six feet in height.

The beam pulsed at 10kHz. The descending warheads took 25 milliseconds to pass through the illuminated zone. The logic counted out sixty pulses and then detonated. In theory, the crews could shoot through the laser beam as long as it wasn’t more than a hundred yards behind them. The shells would pass through the narrow beam so quickly it would not accumulate the required 60 pulse...but nobody wanted to test that theory.

Richards’ command post was nestled in the median between the elevated roadbeds where the freeway passed over a railroad grade. Richards chose the position to minimize exposure to enemy fire.

The twelfth round was filled with ether rather than gasoline or diesel fuel. The dispersion charge was also salted with aluminum dust to ensure a sparkler effect. Janelle really, really wanted the rounds to go off.

The twelfth round detonated and a hundred foot-by-hundred foot patch of vehicles were flattened, including the van that Richards was in. The confined area of the median where Richards sought shelter functioned like a parabolic reflector and increased both the magnitude and duration of the pressure pulse.

Each mortar had fired twelve rounds and they were breaking down to move to their next target two minutes after they dropped the first round down the tube. They had another command post to destroy three miles up Livingston County line.

Medics extricated Richards from his demolished van a half hour after the attack. They used a cold chisel to cut off the hinges. The doors were so badly sprung that they would not open.

Richards was still breathing although blood was trickling from his ears and nostrils.

Richards and a dozen other gravely wounded officers were loaded on three flat-beds and evacuated to Howell.

The lead flat-bed encountered an Improvised Explosive Device when it went beneath the first overpass.

The truck was disabled and the driver was killed. The stretchers were transferred to the two running trucks.

After that, the two-truck convoy left the freeway via the exit ramp and re-entered by the entrance ramp to avoid overpasses.

The lead driver saw that the bridge over Doan Creek was gone due to the crisp lighting and the ridge of material that had been displaced by the explosion. 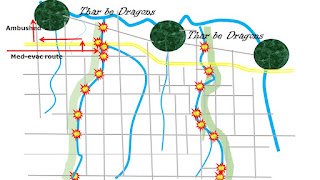 The two flat-beds backed up the eastbound lane until they came to an “Authorized Vehicle Only” crossing which they used to cross to the westbound lanes.

They exited the freeway at Williamston Road. Mentally flipping a coin, the lead driver chose to turn north….into “Thar be Dragons”.

The bandits who ambushed the vehicles simply threw the stretchers, bodies and all, into the ditch beside the road followed by the bodies of the drivers.