Dendrology is the identification of trees.

Reader JSW recently commented that they recently purchased property in Michigan and expressed an interest in identifying the trees growing on the property.

Then, in a follow-up email, he indicated that his property was approximately three hours from Eaton Rapids AND there was a significant amount of snow on the ground.

Let's see what we can do, sleuthing wise, with the information JSW gave us.

Snowmobiling is very popular in Michigan and there are many sites where you can view information about local conditions.

Let's assume JSW's property is in Wexford County since they still have decent snow-pack and it is approximately three hours from Eaton Rapids.

The parts that were not covered in hardwoods were "pine plains"

More recent nomenclature for the forests that were originally described in Wexford County are Dry-mesic Northern Forests for the hardwood forests and Dry Northern Forests. 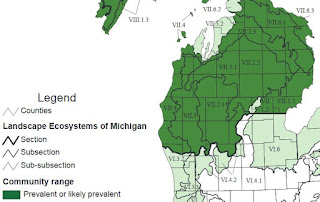 
That gives you three evergreens to key out. The hardwoods will basically fall into three bins, Oaks, Maples and "poplar-like" trees. 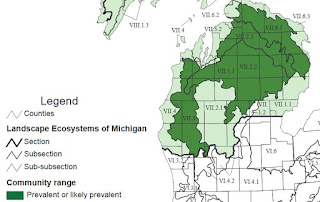 
One nice thing about both of these forest types is that wild blueberries are often found where the canopy is thin. That is some good eating.

The point
The point is that you can make the task of identifying your species much simpler if you know what you are trying to key out. There is no point in looking for Sycamore or Honey Locust growing wild in Wexford County.

Another simplification is to ask yourself, just how precise do I want to be? Except for professional foresters, most folks are plenty happy to separate oaks into "white oaks" with rounded lobes and "red oaks" with pointy lobes. Trying to identify the various species of "red oaks" will drive you mad.

As a first pass, you can walk through your woods in Wexford County (or nearly any place north-of-the-knuckles in lower Michigan) and separate the trees into Pines (evergreens, needles in bundles), Oak (has acorns, excellent firewood), Maple (look at the Canadian flag), Poplar (leaves shimmy in breeze, grow fast) and Birch (similar to poplar, bark peels easily from trunk, better firewood than poplar) and you will have identified at least 80% of the trees in your woods.

At that point, you will find the occasional tree that doesn't fall into any of those bins. It might be a beech tree or a basswood tree. If so, you are probably on the wetter end of the "Dry-mesic" forest.  When you get time, you can key out what the odd-ball trees are...but only if you want to.