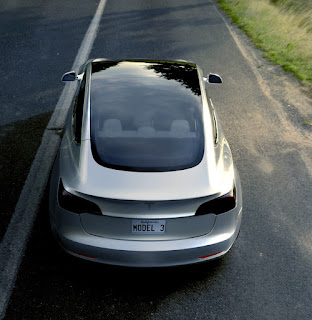 Like the AMC Pacer, the Tesla Model 3 will set new standards.

Technically, he was correct but he was describing three different bumper beams.  The 2 pound beam could not meet the federal spec.  The $2 beam was made of recycled milk jugs.

He was given the go-ahead to put this mythical creature into production.

Eventually he was successful.  He put a six pound, $15 (factory cost) beam on a vehicle.  What was lost in the hoopla was that the people responsible for the body structure put 15 pounds of additional steel across the front of the radiator to keep the plastic part from doing the splits.  That drove additional cost into the cooling system as well.

The executive was a hero.

Tesla's Model 3 has the same odor
Perhaps every attribute that is being trumpeted might be possible.

Perhaps the batteries will be good for 8 years and 100,000 miles.  By the way, how long is the battery in your cell phone good for?  Does it get baked by the sun?  Does it get exposed to -20 F temps?  Does it get shaken, stirred and spindled by spring potholes? Just asking?

Perhaps the vehicle will be able to reliably give a range of 330 miles per charge.  Reliable suggest that it can do it while carrrying two passengers, on rolling terrain with 60,000 miles on the odometer.  Can it do it with the air conditioner or the heater running?

I used to work in a plant that produced 1100 vehicles a day.

My plant had major assemblies shipped in.  Each assembly had a bar-code and had been built specifically for the vehicle it was installed in.

Every seat, headliner, dashboard...all the door panels.  The factory sent the build manifest to the suppliers and they either built or pulled out of inventory the part that went into the vehicle.  They loaded the parts into rolling racks with mail cubbies.  The person working on the line pulled out the part, verified that the Chassis Sequence Number on the part matched the Chassis Sequence Number of the vehicle coming into his station and then he installed the part.

That did not happen overnight.

Professional interest
Looking at the structure of the vehicle I have a couple of geek questions.

The vehicle seems to have a singular lack of "bulkhead" type structures.  In a conventional vehicle that would be the dash-panel between the engine and the passenger compartment and the structure behind the rear seat.

Some types of vehicles, station wagons for instance, dispense with the bulkhead behind the rear seat but address the issue by have a beefy ring of beam sections up the sides and across the roof at the location.

These bulkheads serve two purposes.  As a passenger, the most important function is that they prevent the vehicle from crushing when you are T-boned by a vehicle with a high bumper bar...like a Ford F-150.  That bumper bar is high enough that it comes in over the rocker...it is just below knee level when you are riding in a ground hugging passenger car.

The other function of those bulkheads involves the vibration and handling characteristics of the vehicle.  They are important for the structural integrity of the vehicle when it is twisted.  Twisting occurs when you enter a steep driveway on the diagonal or when a tow truck lifts the front of the vehicle and drags you across a curb or through a ditch in anything other than a straight-on approach. 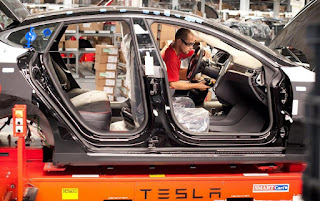 The other thing I noticed was the door seal strip configuration.

The other issue with the secondary door seal is that they can block the drain holes in the bottom of the doors.  The doors can fill with water in car washes or in heavy rain storms and the water spills out through the speaker holes into the interior of the vehicle.  The wet carpet rots and starts to stink.

You might think, "It never rains that hard here."  But consider what happens when you are parked partially under an awning or roof.  The water shed by that overhang all cascades somewhere.  That water streams down the window and defeats the rubber wiper at the bottom of the window.

You can be sure if an old retired auto worker was able to see these issues from a few pictures on the internet that the insurance executives who reviewed the Tesla Model 3 saw much more.

Posted by Eaton Rapids Joe at 8:54 AM