Even our appliances have a sense of humor 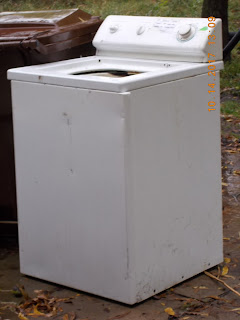 Our old washing machine finally stopped working yesterday.  In case you were not paying attention it was Friday the 13th.  It stopped while washing a full load of clothing.  Neither threats, promises, yelling or vigorous kicks could rouse it.

Getting a high efficiency washer has been on my list of capital improvements.  Clothes driers use a lot of energy.  They suck cool air out of the house in the summer and warm air out in the winter.  It is far better to spin liquid water out of the clothing than to pay the energy penalty of turning it into vapor. 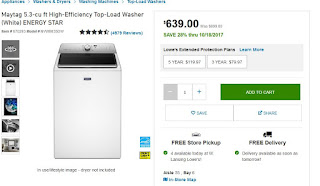 We went to the local big-box store thinking we were going to buy this unit.  When we got there and looked at it we saw that the lid is glass and that did not appeal to us. 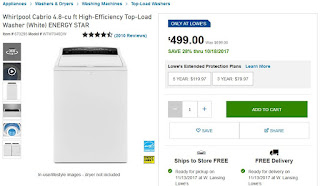 Mrs ERJ wandered around and found this unit which had ten percent less volume and cost thirty percent less.  The only unit that was available was the display model and it had a dent and some paint rubbed off.  Eric, the outstanding young man who was waiting on us was willing to knock another $50 off after looking at the damage. 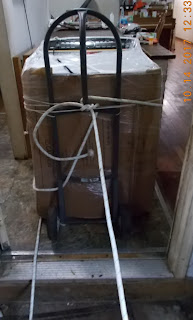 The point of the spear. 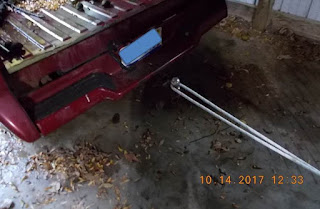 The dead weight.  Pay close attention.  It is imperative that the person who intends to use "rappelling" methods to brake the descent of the appliance double-check that the S-10 is in gear BEFORE starting the descent.

I once used the old, green S-10 to attempt to jump start a car with a dead battery.  The motor was running, the hood was popped...and then the S-10 started rolling backwards down a hill.  It did not stop until it encountered a swimming pool.

Fortunately for me it was winter time and the swimming pool was an above-ground pool.  The bumper hitch stopped when it hit the 8000 pound block of ice.

But it could have been ugly.

Fortunately for me, I remembered to check before starting down the stairs.

Pretty happy guy
I was pretty happy to end up paying $450 before taxes instead of the $630 I thought I was going to have to pay.  No broken bones, strained muscles or soar backs.

I am going to count this one as a win.