Another Thursday in Production 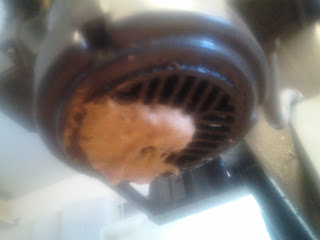 We were flying along producing about 400 units an hour when, after four uneventful hours of production, the system started faulting out.

The closest maintenance person went through the usual procedures.  He laboriously unloaded the work-in-process, lowered operating parameters to process initiation values, re-instructed the operator (me) to slow down.  After four or five minutes of effort, he got the machine fired back up.  And it promptly faulted out again.

The process was repeated and the machine faulted out AGAIN.  The old timer was at lunch.  He was called.

Over-load vs Over-temp
If you are like most folks you are going "Ah-ha! They overworked the machine.  They kept focusing on increasing throughput and broke the machine."

There are two pieces of evidence that make that root-cause unlikely.  The machine worked fine for four hours!  Why didn't the machine fault out in the 14,400 seconds that we were pouring the coal to it?

The other piece of evidence was that the machine did not take off under zero load.  All the material had been pulled off the system.  All start-up parameters were set to zero.  And the maintenance guy still had to fiddle with it another four or five minutes.

The other possibility was an over-temperature condition in the motor.  The reason the maintenance guy's routine worked is because it gave the motor some time to cool off.

How to check it out

Well, for one thing the case of the motor was hotter than a popcorn fart.

Another thing was that it was kicking out almost no cooling air.

The motor in question is not in an optimal position.  Organic mud collected on the air intake and probably gummed up the fan blades.  Air flow was still weak, even after the air intake screen had been cleaned.

A couple of longer term fixes would be to clean out the cooling end of the motor, re-orient the motor so the cooling end was farther way from the cruddy mist.  A nice touch would be to find a collar of clamp-on, extruded heat sink material.  I did not measure the OD of the motor can but it looked like about 8".  Any leads from my readers will be much appreciated.

The final part of the puzzle is "Why did it run four hours?"  The probable answer is that the organic mud shrank when it dried out.  Four hours of soaking up mist caused it to swell enough to drive the final nail in the coffin.

This motor is plenty of motor, it just needs some TLC and to be spun away from the dirt.

Posted by Eaton Rapids Joe at 8:52 AM