I have a friend who lives in Bellevue, Michigan who as a beautiful row of hazelnuts.

His problem is that they are all the same kind, Grand Traverse and hazelnuts are not self pollinating.

He knew this and, at one time, had several varieties of hazelnuts in his orchard.  And then the Eastern Filbert Blight wiped out all the other trees.

He gets very, very light crops of nuts.  Larry may not know it, but I am about to give him a gift.


This little bush has almost one hundred catkins on it.  There is roughly an 80% chance that it can pollinate Grand Traverse.  There are 14 documented "alleles" and two of the alleles are manifest in the female flowers.  Based on random chance, there is at least one-chance-in-seven (14%) that the two cultivars will not be compatible.   Flipping that around, there is about an 80% chance that it will be able to pollinate Grand Traverse.

I have no idea if this seedling will be compatible with Grand Traverse but it is from an extremely different genetic background and so I am optimistic.

These seedling hazelnuts were purchased from the National Arbor Day Foundation.  Their seedstock is from Wisconsin, Minnesota and Iowa and is a mix of European and American hazelnut species.  The precocious catkin production of the one seedling is likely to be a gift from Corylus cornuta.  C. cornuta may be the hardiest hazelnut in the world.  It has been collected in central Saskatchewan and Alberta in Canada.

Grand Traverse is a cross with Turkish Tree Hazel and European Hazel in it bloodlines. 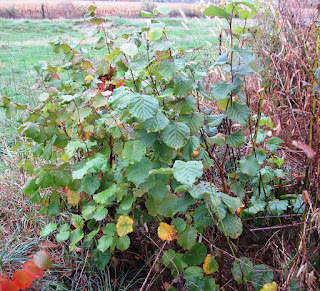 These hazelnut seedlings are in the very next row and you can see they still think it is summer.