The "gig" economy is becoming more and more common.

Folks do a little bit of this and a little bit of that to get by.  The scale is smaller.  The range of tasks that a person has to master is much greater than a factory job.  The person working gigs must be a bookkeeper, a coach, a doctor.  They must also master the art of merchandizing or retailing.

Retail Lighting
Retail lighting is closely related to display and packaging.  Consequently, I am going to write about all three of those topics as if there was no functional difference between them.

People are hard-wired to respond to changes in sensory input.  We are less responsive to magnitude than we are to rates of change.

From an evolutionary biology standpoint, picture a woman walking across the primordial plains.  She is carrying a baby and a large "cigar" that carries the community fire.  She is keeping an eye on her older children as they wander across the plains.  She is looking for edible seeds and tubers as she walks.

Now, suppose that there is a disturbance in the tall grass.  Something very large is moving directly toward her at a high rate of speed.  Or perhaps something that looked like a large fleshy root moves a scant half inch.

The humans that did not respond at the speed of the sub-conscious were removed from the gene pool.  We are hard-wired to respond to changes faster than conscious thought.

What does this mean to lighting in the retail environment? 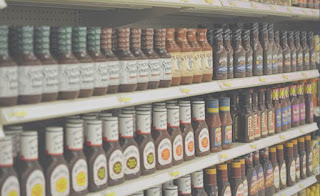 Picture the typical, exhausted shopper walking by this display.  As they walk parallel to this display, is there any "new" information?  Is there anything that grabs them and triggers their hard-wiring?

Backstory
I blog.  I am into nature and trees and all that stuff.  In the middle of winter I can identify sassafras trees from half a mile away while driving down a freeway at seventy miles away.

Finally, it occurred to me.  While driving at seventy miles an hour I can look at a cluster of trees in a fence row for a quarter second and I unfailingly create an accurate, three-dimensional map of the structure of the tree.  The unique trait of the sassafras tree is that the lateral limbs are exactly horizontal and the twigs at the end of the branches point up nearly vertical.  The unique trait is three-dimensional!

For the total technical geek, this strategy of three dimensional mapping is exploited in Synthetic Aperture RADAR, by Phased Array RADAR and by Towed Sonar Arrays.  This is 1980's technology.

Why?
Why do people pay $1500 for a diamond but won't spend a $1 for a ring with a piece of frosted glass?  Why do many people adore black opals?

The opposite of diamonds is diffuse, muddy light.  Yeah, ambient fluorescent lighting.

How can a retailer tickle the hard-wiring?
First of all, strip 75% of the product off the shelf.  Spacing out the product presents the consumer with an ever-changing, isometric view of the product as the travel down the aisle.  Your display shelf should not be a warehouse!

Second, third and fourth, INTENSE single point lighting.  If you have ever messed around with lighting you know that single point lighting creates shadows and shading, the basis of three-dimensionality.  Sufficient intensity creates kind of an X-Ray vision where depth of product is plumbed.  Think about an exquisitely varnished wooden musical instrument or a much-loved automobile with thirty coats of candy-apple-red paint.

Products that are transparent or translucent can be BACK-LIT!  The bottles or jars act as lenses; the light will sparkle or clock as the consumer moves past.  The consumer will be incapable of ignoring this product.  IT IS IN THEIR GENES!

Their vestigial survival instincts will force them to invest cognitive resources in "mapping" this product.

In many cases, the increased dwell time will result in an emotional !BELL! being rung: "Hey, I remember this product.  It is delicious!"  Touch-down!  You just made a sale.

In other cases, a heuristic involving sunk cost will kick in.  The customer's mind will conflate "cognitive resources invested" with "I am interested in this product but cannot remember exactly why."  That customer has a higher probability of putting your product in their shopping cart and trying it.  If they try it they might decide that they like it.

Getting fancy
Ok, we stripped 70% of the product off the shelf but now we cannot keep the shelves stocked because it is moving too fast.  Damned if you do, damned if you don't.

The following discussion is focused on transparent and translucent products...

What if one were to place a row of product near the edge of the shelf and the "pitch" of the product was such that the gap from item-to-item was 65% of the depth of the container.  Now, picture a flat, LED strip behind that facade of product with integral lens to back-light the produce.  Behind the LED strip are three or four rows of product that can be moved to the facade position. 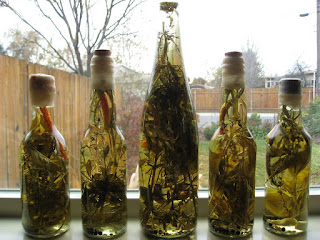 The jars or bottle of (honey, jelly, wine, juice, herbed vinegar, olive oil....) will glow and sparkle as the consumer cruises down the aisle.  Will the consumer be "impulsed" to buy these products...or the bottles of BBQ sauce shown in the top picture?

The key is to make the "visual" change as the customer walks down the aisle.