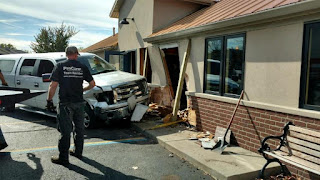 According to the Eaton Rapids Flashes:

A pleasant Sunday afternoon lunchtime was interrupted with a busted wall, flying tables and booths and a shower of ketchup and mustard when a Ford pickup truck crashed into the dining room of the Eaton Rapids Craft Co.  Customers and staff were noticeably disturbed...

The chaos began when the driver of the truck reportedly opened his door and proceeded to exit the still moving vehicle... Upon exiting the driver's seat his passenger attempted to take control of the truck, which was moving at approximately 50 miles per hour.  The truck reportedly took air on the curb, hit a customer's vehicle and then crashed into the dining room.  Drugs were reportedly a contributing factor.


The article was written by a young journalist named Adam Droscha and is as fine a piece of writing as I have ever seen in a newspaper.
Posted by Eaton Rapids Joe at 6:29 AM