He was NOT a wee leprechaun, but highland warrior.  Shane once said, "Anybody can drink beer, but most people should not drink whiskey....it makes their teeth fall out."  He grossed about 280 in his prime and darned little of it was fat.

He was breaking in a new apprentice named Gary. Gary was a kid of about 180 and quite full of himself.

They approached the press pit.  Shane said, "Show me what you got, kid."

Gary peered over the edge of the pit (roughly the size of most backyard swimming pools and usually 8-to-15 feet deep) and could not see the bottom of the pit.

Sheet metal is lubricated before it passes through the dies.  The metal is stretched and pulled by the dies.  The sheet needs to be able to slide over the surface of the dies and suck into the highly stressed areas or it will tear.  The lube is a petroleum product that is emulsifies in four parts water to one part lube, similar to how soybean oil is emulsified in Ranch Dressing.  The resulting brew is opaque, bluish-green and looks like split pea soup.  Rags and paper towels will clog the drains in the press pit and the lube will start to fill it.

Gary may have been a  new apprentice but he was not born yesterday.  He pulled out his "yo-yo" (measuring tape),  ran the end down to find the bottom.  He reeled the tape back in and looked at the end.  The last 3/4 inch was wet.

Gary pulled on his knee high swampers.  Shane said, "Are you sure you got this?"

Gary said, "No problem, just hand me my tool box when I get down there.

Gary scooted down the ladder with all the agility of a spider monkey, got to the last rung and hopped off with a flourish.


All press pits are outfitted with standpipes.  The stand pipe in this pit was exactly 48 inches tall.  Gary jumped out into 48 and 3/4  inches of  bilious, viscous snot, redolent with the sulphides, amines, butyric acid and aldehydes of anaerobically decomposing rodentia and factory detritus.

Jumping into it (and wading through it) agitates the sediment beneath the mephitic glop and adds structure and adacious top-notes to the ambient miasma as bubbles detach and fight their way to the surface.


Shane said, "Gary, you are going to get three lessons for the price of one, today.  First, always measure in two places.  Two, you better stop and do some serious thinking when a journeyman asks you, "Do you think you got this.".  Three, you might as well finish the job once you get dirty."

The job took Gary around to the far side of the pit.  It was tough wading due to the piping on the floor and the snot.  The odor was enough to gag a maggot.

When Gary was done, Shane told him about a cable tray that was covered with tread plate.  Gary was able to find it and only had to wade through 24" deep snot to get to the side of the pit where he could boost his tool box up to Shane.

Shane said "Hold still."  Shane grabbed the loops on the shoulders of Gary's monkey suit and dead lifted him out of the pit.

Shane told Gary, "Go home and come back tomorrow.  I will square it with the boss.  I told the boss this job was going to take all shift because we were going to have to pump out the pit.  He will be happy to get it back online sooner. I think you had enough learning today."


Walking in deep snow is very much like jumping from standpipe-to-standpipe.

The first time you walk somewhere it is a chore.  But the snow compresses down to about 30% of the uncompressed height, new snow blows in and fills the depressions.  Each time you walk out, you try to step in the same footprints because it gets easier and easier as the depressions become filled with packed snow.

That works pretty well until you get a big snowfall with some blowing.  That obliterates the divots that showed you where the footprints were.  Then you have to guess where the "standpipes" are.

Guess wrong and snow pours in over the tops of your boots as you teeter and fight toppling.  I remember Gary and Shane when that happens and am glad it is snow. 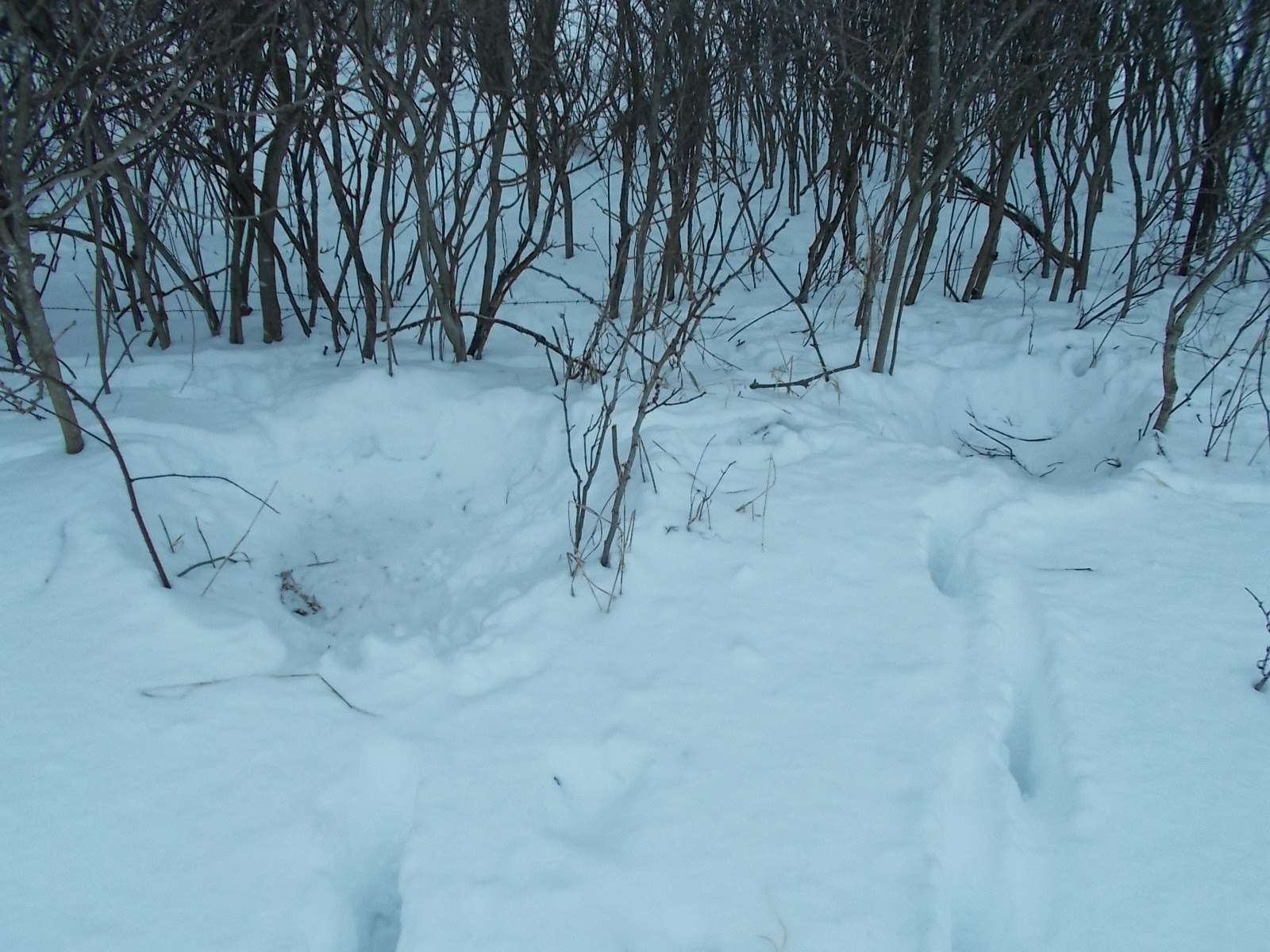 A couple of deer beds.  Photo not color corrected, gray-blue due to cloud cover.  These bed were downwind of Norway Spruce trees and a dense Gray Dogwood thicket.  Notice how deeply their body heat melted down into the snow.
Posted by Eaton Rapids Joe at 9:27 PM