Brooms and the Economy (long)

As a child it was the highest magic to see him balance a broom on the palm of his hand, bristles up.  He did it effortlessly.

We all attempted to imitate him but to no avail.  Every effort was short lived and would result in the broom toppling and us accelerating across the kitchen in an attempt to stay beneath it.  My grandparents had very few breakable items in the kitchen, the usual stage for this endeavor.  In retrospect, it may have been the antics of his grandchildren attempting to imitate him that brought him the most joy.


A recurring topic in this blog is the concept of "Deer Gates".  A deer gate is a place where deer traffic is funneled by virtue of the interplay between terrain, vegetation, food sources, man-made obstacles and the natural habits of deer.  Deer gates are efficient places to hunt deer.


We all know an office gossip.  We don't always like them, but we tolerate them because they fill an important niche in the social ecosystem.  The condense the collective Zeitgeist.

There is also somebody who seems to be a little bit more in-the-know.  They condense information about direction-of-change.

Between those two people, it is usually possible to triangulate how upcoming events are likely to impact you.


The key to balancing brooms can be understood at two levels.

At the simplest level, the key is to monitor the center-of-gravity and use only that information to make your control inputs.  To be redundant, put a piece of tape around the broom handle at the center of gravity (found by balancing the broom horizontally on your extended finger).  Let your brain use the information of deviation from the palm of your hand and the speed with which it is deviating to make adjustments to bring it back into balance.

The tape is needed because there is a tendency to lift your hand as you balance causing your eyes to shift away from the center-of-gravity.  The tape an anchor for your eyes to focus on.

At the second level, you will notice a point about 4 or 6 inches closer to the bristles (higher) that does not move.  That point is the deer gate.

Every person has a "scan" rate.  Observations are made, information is integrated, muscular action is ordered by the brain, the muscles contract.  It all takes time.

The deer gate point is more elegant than the center-of-gravity because it combines your unique scan rate with the physics of the broom (deviation and rate of deviation) so that you only need to mentally monitor deviation.  You get rate of deviation for "free".

You can watch the "deer gate" and very easily balance the broom without the breaking of crockery, broomsticks or stubbing of toes.

Do you really want entertainment? 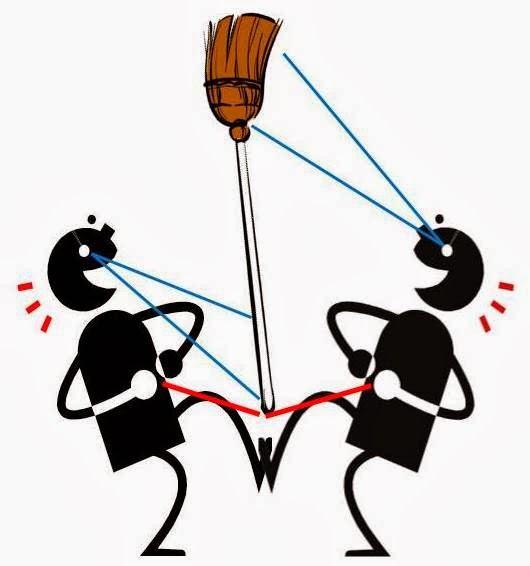 Tell one that their goal is to minimize the excursions at the bristle end of the broom.  I am in a mischievous mood, so I am going to label deviations to the bristle end "repurposing of urban populations".

Tell the second controller that their goal is to minimize excursions of the end of the handle.  I am going to label those deviations "rape of the environment".


The national economy is not complicated until you start trying to "bend" it.  Unfortunately, it is a game of Prisoner's Dilemma where the controllers must try to game the system.  Imagine a hundred controllers attempting to balance the broom.

There is hope.  We nearly always use "the economy" as shorthand for the national or global economy.  However, the per capita output of our personal and family economies are not dwarfed by the national economy.  A recent calculation placed the value of a "housewife" (a part time position for most working women) at $59,000 per year.  That is striking when you figure that the median income is about $25,000 per person.  Clear evidence that the "family economy" dwarfs the wage economy.

Put a wrap of tape on your broom's "deer gate" to help you stay focused.  Pilot your ship with singleness of purpose.
Posted by Eaton Rapids Joe at 10:05 AM