Pears, in general, have been easy to graft.  The three pear trees I worked today have not been easy.  They have been a monument to man's folly.

The trees are in Jean's yard.  Actually, I lied.  We planted the trees on her neighbor's field (with Jean's neighbor's permission) to get them away from Jean's goats.

Did I mention that Jean keeps goats.  She also runs a daycare, keeps a half dozen other species of animals and is a 4-H mom.  She is a cheerful, graceful flurry of activity.  Pear trees are the least of her worries.
There are legitimate reasons why Satan is depicted as a goat.  Matt 25:33 depicts the fallen as "goats".  Jean's Capra aegagrus hircus has been an over-achievers at living down to that distinction.

I should have planted the young pear rootstock 6 feet from the fence.  At least the goats would not have been able to reach the growing tips during those rare intervals they were successfully incarcerated.

If at first you don't succeed...


Every few years I threw more grafts onto those rootstock.  None survived.

After many years of laboriously pushing their twigs a few inches higher each year, in defiance of death, rot, weather, rabbits and goats, the tops of the rootstock finally grew beyond the reach of even the tallest and most athletic goat.  The bottom six feet of these trees were densely thorny.

I put 5 grafts on each tree.  I pray that at least one graft on each tree takes.  Then, with judicious thinning that twig can serve as the genesis of the new tree.  Given a little bit of luck, Jean will have some full sized, producing pear trees in short order.


I used Parafilm-M for the first time today.  I plan to use it when grafting nut trees.  I decided that I better get some experience using it while standing flat on the ground.  The best time to learn something is NOT when you are standing on a ladder 15 feet in the air, juggling many sharp tools. 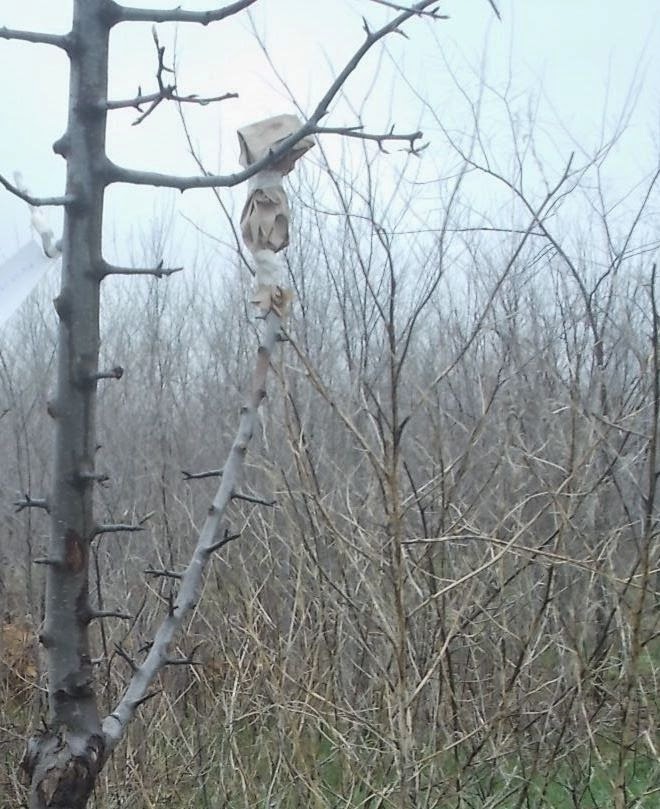 I also went "old-school" on some of the grafts.  I bagged them with brown paper lunch bags.  The bags serve as mini-greenhouses, warming the air and slightly increasing the humidity.  The only caution when using paper bags is to squeeze most of the air out of them and tape them so they cannot puff out like a spinnaker.  Leaving too much slack allows the wind to grab the bag and batter the fragile growing shoots.
Posted by Eaton Rapids Joe at 11:56 AM