Belladonna helped me with some cement work yesterday.

She intends to be a medical doctor when she grows up and sees little utility in learning how to do this stuff.

I know better.  One of my younger brothers yearned to be a doctor.  He started out as a chemist.  He saved his money, buying beater cars and keeping them running.  He studied.  Took the MCATs and got an OK score.  He finally was accepted to a pretty good medical school.

In one of his classes they had to replace the ball on a femur of a cadaver leg.  Little Bro scanned the laminated instruction sheet.  Every tool that was to be used had a life-size photograph so the practitioner could find the correct size.

The instructions were very straight forward.  Saw off the top of the bone 1.5" from the top of the ball, drill down the center of the bone with a 5/16" twist drill, finish with a Morse taper reamer.  Little Bro was pleased to see that the drive was the very same model of Makita battery drill that he had at home.

He sawed off the top of the bone at the indicated level.  He picked the 5/16" bit and tightened it into the chuck by spinning up the tool and grabbing the collar.  In-out.  Reverse motor.  Spin up, grab chuck.  Remove bit.  Insert reamer.  Forward motor.  Grab chuck.  In-out.  Suction chips (like changing sparkplugs on the Jeep).  Flag up for Prof to inspect work.

Some class-mates were still sorting through their drill bits trying to figure out which was the 5/16" drill bit.  They were comparing to the drawing.  They were struggling with the optical problem of the tool bit not being in the same focal plane as the picture.  Apparently they rarely used tools and either did not know or had forgotten that the size is stamped on the side of the drill bit.

Little Bro also had a class-mate who was "weird" about touching flesh.  She had partnered with Little Bro during dissection and had attempted to prop up layers of tissue with pencils of various lengths rather than touch them.  She was really struggling to even touch the saw to the bone.

On to the story


Belladonna's German Shepherd has a beautiful coat of fur.  The iciest blasts of winter are a balm to him. He does not like heat.  Consequently, being a very smart dog, he tunnels for relief.

And the coolest place to tunnel is beneath the dog house.

It is a large dog house.  The floor is about 48" square.  The plans came from the internet.  I did a search on functional doghouses working dogs.  The house weighs somewhere north of 250 pounds.  It would hurt to have one drop on you.

Hercules' digging had undermined the four cinderblocks that support the house.  It was time to do something about that.

We rolled the house off the blocks. 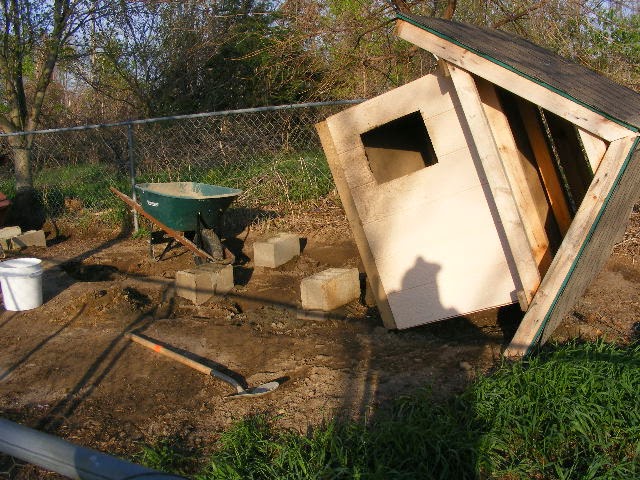 We lifted two of the blocks that were kitty-corner.  Then we used my trusty Iwan 6" Post hole Digger (my Ph.D!) to bore holes 24 inches deep.  We stuffed in some rebar, reset the blocks, mixed some redi-mix and shoveled it down the holes in the cinderblocks.

OK, I directed and Belladonna actually did all of the work.  She started out grumbling but then became absorbed in the task.

It is easy to forget that there is art to a task as simple as mixing concrete in a wheelbarrow.  It did not take Belladonna long to figure out that she preferred the hoe for mixing.  We discussed how we would modify the angle of the hoe blade if we did much concrete work.  We would bend it so the blade was 90 degrees from the handle.

Belladonna also learned that the appearance of concrete is not linear as you add water.  It is dry, dry, dry....and then you add what seems like the tiniest little splash, and then it is soup.

I commended Belladonna on performing her first root canal and her first fillings.
Posted by Eaton Rapids Joe at 8:23 AM