Having an ideology is all well and good, but it actually has to work in terms of providing a satisfactory life for much of the population.  -Dmitry Orlov


One quirk of human nature is the urge, in the face of faltering output, to redouble our efforts and to intensify the application of "solutions" that appeared to work in the past. 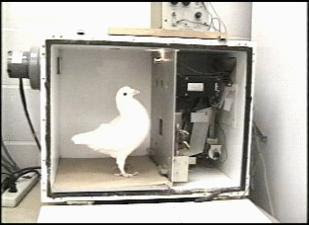 One of Skinner's experiments examined the formation of superstition in one of his favorite experimental animals, the pigeon. Skinner placed a series of hungry pigeons in a cage attached to an automatic mechanism that delivered food to the pigeon "at regular intervals with no reference whatsoever to the bird's behavior."

The experiment might be said to demonstrate a sort of superstition. The bird behaves as if there were a causal relation between its behavior and the presentation of food, although such a relation is lacking. There are many analogies in human behavior. Rituals for changing one's fortune at cards are good examples. A few accidental connections between a ritual and favorable consequences suffice to set up and maintain the behavior in spite of many unreinforced instances.


Tversky and Kahneman offer the following vignette to explain how even maladaptive responses can be reinforced, leading the decision maker to believe that they are exerting positive control over events when, in fact, they are poisoning the results.

The failure to recognize the import of regression (to the mean) can have pernicious consequences, as illustrated by the following observation. In a discussion of flight training, experienced instructors noted that praise for an exceptionally smooth landing is typically followed by a poorer landing on the next try, while harsh criticism after a rough landing is usually followed by an improvement on the next try. The instructors concluded that verbal rewards are detrimental to learning, while verbal punishments are beneficial, contrary to accepted psychological doctrine.

This conclusion is unwarranted because of the presence of regression toward the
mean. As in other cases of repeated examination, an improvement will usually follow a poor performance and a deterioration will usually follow an outstanding performance, even if the instructor does not respond to the trainee's achievement on the first attempt. Because the instructors had praised their trainees after good landings and admonished them after poor ones, they reached the erroneous and potentially harmful conclusion that punishment is more effective than reward.

Thus, the failure to understand the effect of regression leads one to overestimate the effectiveness of punishment (or any remediation applied in response to dire circumstances) ...Consequently, the human condition is such that, by chance alone, one is most often rewarded for punishing others and most often punished for rewarding them.


The true believers interpret the natural biorythms of the economy and their personal fortunes as validation of their ideology.  The upswing after a low validates the intensification.  Downturns and failures of the rain-dance are seen as evidence of impure believers and/or violation of previously unknown rules.  Acceptable behaviors are increasingly codified until Merlyn's Anthill is achieved; "Everything not mandatory is prohibited."


When times are tough people feel powerless.  They look around for the Man-with-a-Plan.  Many are irresistibly attracted to "winning programs."


Snarky (but very funny) video about the class of people who affiliate with "winning" athletic programs.


During the end game, Ideology becomes nothing more than mental masterbation.  Practitioners trade connection with the real world for delusions of grandeur and the illusion of control.  Real people avoid shaking hands with them.


One of the best supervisors I know is Mike Shepler.  I once asked him his secret, "How do you make it look so easy?"

His answer took me off guard.  "I smoke cigarettes."

He elaborated.  "I cannot tell you how many times I ran into a brick wall, went out to the loading dock to smoke a cigarette and when I came back, the problem was gone."

I asked him to give me an example.

"Last week I had an unused office that had to be moved to make room for parts storage.  I could not get Facilities to return my calls.  I would have taken care of it myself but the Ergo-fascist prohibit production people from lifting more than 25 pounds.  I mentioned my unsolvable problem to my production people and went out to smoke a cigarette.  When I came back the office had magically moved 40 feet to the north."

I asked, "Weren't you worried about those guys blowing out a back or a knee?"

"No, seriously, these guys can throw 60 pound hay bales completely over a hay wagon.  They do it all summer long.  The Ergo standards are BS.  They exist because somebody scammed the Workman's Comp system and the easiest way for Ergo to get off the hook is to create increasingly unworkable rules that make my job harder."

Contempt for the system


The knights joust in the courts of Du Lac, killing and dying to defend the honor of their sacred scrap of ribbon (their ideology).

The middle managers and Walmart Wolverines fill the stands;  they chant, cheer and swoon. Their need for the illusion of power and control fed by the Deus ex machina theater unfolding on the field beneath them.


The peasants grub around in the dirt, grow food and kill the coyotes that are eating their chickens.  They game the system by acting stupid and by ignoring the system in thousands of undetectable ways.  The peasants endure.  Nothing changes.
Posted by Eaton Rapids Joe at 8:47 AM