I saw an article regarding vaccination rates on Daily Mail that was total gibberish.

I followed the links to the CDC page and saw that the article was almost a word-for-word cut-and-paste.

I didn't just look at the pretty charts. I downloaded their "data" and ran the math.

The premise of the article was that some demographic sub-groups are showing more "vaccine hesitancy" than others. 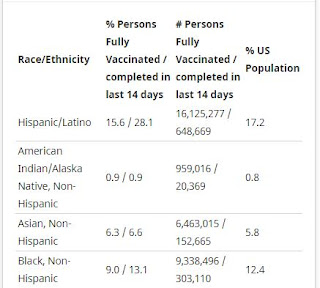 According to this table (and I could not replicate their numbers because I have no idea what denominator they used), less than 1% of people who identify as Native-American are "fully vaccinated". Authorities are baffled.

If you had been given Small-pox riddled blankets and then had your land stolen from you by "Authorities", would YOU trust them?

Blacks are listed as having 9% of them fully vaccinated. Again, authorities are baffled.

Tell me with a straight face, why would YOU trust the authorities.

Oh, and these same authorities are juicing up Black Lives Matter, Critical Race Theory and the narrative that all bad outcomes are due to systemic racism and malice on the part of all White people.

Tell me, would YOU trust the authorities?

I don't know whether to laugh, curse or cry.