Can you think of two words that when combined would be more likely to produce a grimace or a rude joke?

"Prune" is used in the sense of a type of plum, not necessarily one that has been dehydrated. You can dry any kind of plum, "Prune" plums make the best dried plums.

While "French Prunes" are large, voluptuous and extremely juicy, German Prunes are petite and the intercellular spaces of the ripe fruit are filled with air rather than liquid. 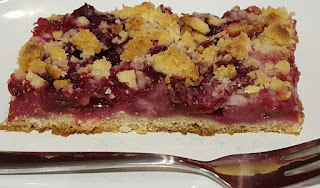 Using French plums in a recipe for German Plum Cake would be like throwing water-balloons at an angel food cake. Too much liquid. The ratio of fruit-to-batter assumes the use of German Prunes. They behave well in the oven, leaking just the tiniest amount of juice (flavor) into the surrounding binder.

German Prunes are a class or land-race of plums, Prunus domestica, that spans Europe.

In France they are often called Mirabelles.

German Prunes come into their own in the more continental climate of Germany, Poland, Russia, Hungary and the Balkans because some strains are very late bloomers and avoid the spring frosts that nuke early blossoms.

One of the first trees I planted was a plum variety named Dietz offered by Farmer Seed Company of Fairbault, Minnesota. To the best of my Google-fu, the variety and the company are both extinct. In retrospect, "Dietz" was  a German Prune.

I remember the tree as being extremely productive and a regular producer.

While "Dietz" is extinct in commerce, there is a 50% chance that it was a re-badge of a variety brought over from Europe. That, or it was a chance seedling from one of those European varieties.

We had an inch of rain this morning.

The best time to bud (in my opinion) is after a rain that kicks the trees back into active growth. The insult of inserting a bud is forgiven and it heals quickly.

I have two, small trees on my property that were sold to me as "German Prunes". One is Gras Romanesc. It is from Romania. The other is Pozagaca (aka Hauszwetsche) a variety renowned for the production of plum brandy. I decided that I want more than one copy of each.

One source I referenced claimed Gras Romanesc is NOT self-fertile but Pozagaca is. If I had to guess, I would guess that Dietz was either Pozagaca or a seedling of it because there was no other European Plum within a mile to pollinate it.

I have a row of purple leafed plums I grafted on American plum seedlings. I collected the scionwood near Playmakers in Okemos when I noticed a hedge that had a healthy crop of plums on it.

The grafted plums never delivered on their promise. I got the odd plum or two but nothing like the crop I saw in Okemos.

They had their chance. Today I started budding Gras Romanesc on them and I will add Pozagaca buds tomorrow.