The Night of the Killer Yeast 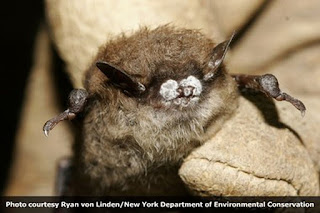 This was of great interest to the wine industry because "wild" yeast added undesirable characteristics to wine; characteristics like rotten-egg smells, excessive foaming, cloudiness and weird solvent smells (like model airplane glue). Killer yeast killed off other strains of yeast and cheerfully proceeded to spread through the must and produce a repeatable, salable product.

There is a disease that is killing off millions of bats in North America. The disease is called White-Nose Syndrome (henceforth WNS).

Bats are communal animals, especially when hibernating. Most bats in the north hibernate in the relatively  few caves and mine shafts that are deep enough to provide an equitable temperature. Consequently, thousands and thousands of bats huddle together, touching, to conserve warmth. The crowding and the humidity are prime for fungi to spread.

Some scientists investigated Pseudogymnoascus destructans, WNS's causal agent and determined that it existed on bats in Europe but did not cause WNS.

Further investigation revealed that various populations of Pseudogymnoascus destructans are infected with different types of virus, or no virus.

Hypovirulence
The challenge of introducing hypovirulence causing virus into wild populations is that the vigor of the disease causing organism must be dialed down to the point of producing a modest infection but it must not be dialed down so far that more vigorous strains overwhelm it and make it extinct.

The home-run scenario would be one where the specific virus could be cultured on an industrial scale in yeast and the growth media aerosol-sprayed into the air as the bats left their caves. As a point of fact, when yeast die of old-age they autolyse, that is, they explode and puke their innards out and that would include any virus swimming within them. The media can be filtered of yeast (large cells) and the active virus will pass through.

Consider the boon this technology offers the patient. Scientists could collect toe-jam from Brazilia, Manilla, Calcutta, Jakarta and other crowded, humid cities. They could screen them for Candida that exhibits killer or hypovirulence characteristics. The most promising candidates could be cultured using standard yeast-growing methods and equipment and a one time dip-or-drench would provide long-term protection against Athlete's foot and crotch-rot.
This could be a very timely contribution to the medical arts. There are recent reports of fungus diseases in the United States that are resistant to all standard antifungal drugs.

Unfortunately, there is little profit to be made with this technology. Once the hypovirulence inducing virus and/or yeast carrying those virus have taken up residence on the patient's skin, it will be there for a very, very long time. Repeat sales would be very, very low.
I would like to think that Universities and non-profits would investigate the possibility but many of their labs are funded by for-profit big Pharma and University bean-counters would see killer-yeast, hypovirulence research as a threat to that cash cow.
Posted by Eaton Rapids Joe at 8:04 AM