A story of rings and robes 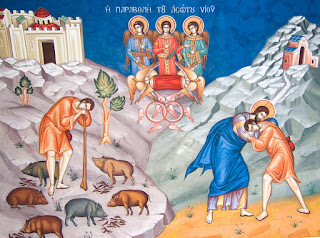 In both cases the story of the Prodigal Son is a story about redemption.

Let's start with easy
The easy version is like the verse in a Hallmark card. In this version we "learn" that God the Father's middle name is "Milquetoaste".

In this version we put ourselves into the sandals of the prodigal son and we are comforted to know that no matter how heinous our behavior toward God and his church, we are already forgiven.

The hard
I need to lay a bit of groundwork here. The portion of the story where the father first sights his returning son is very tightly written. There is no gratuitous detail or fanciful window dressing. Everything that is there is there for very specific reasons.

...his father caught sight of him, and was filled with compassion.
He ran to his son, embraced him and kissed him...
But his father ordered his servants,
‘Quickly bring the finest robe and put it on him;
put a ring on his finger and sandals on his feet. 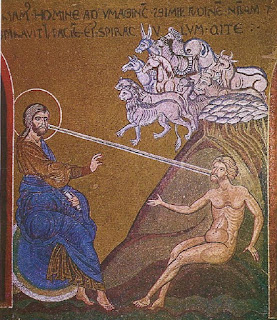 "Kissed him" The first time "kiss" appears in the Bible is in Genesis when God the Father kissed Adam and breathed life into him. The father's kiss of the Prodigal Son returns him to life.

"Ordered his servants" is code that we as servants and brothers of Christ are expected to be active participants in the story.

"Finest robe"  Clothing was more than a badge of authority. It is authority. We still use the term "investiture ceremony" when somebody new is sworn into office. Investiture; where "vest" or formal clothing is the root.

"Ring" Signet rings were used to seal documents and to enter into contracts. Giving the prodigal son one of the family rings meant that the son was granted the power to commit the family to potentially ruinous business ventures. It was the full equal of a CEO's legally binding signature.

"Sandals" Feet were unclean. Those horses and oxen, donkeys and camels did not wear diapers. Jesus washed the apostle's feet to show service and ennobling humility. The story of the Prodigal Son compels us to be actors in the redemption of others even when it is "icky".

Now to make it really, really hard
Using the story of the Prodigal Son in Luke's Gospel as a lens, how does it inform us to treat the clergy who misbehaved?


I own the next part
Q: What are the similarities?
A: The preface to the story has the opinion makers gigging Jesus for ministering to tax collectors, lepers and others who were unclean. In today's society it is difficult to find any group of people who get treated the way lepers were back at the time of Christ but I submit that clergy who committed sex crimes fall into that group.

Q: Do I propose "re-vesting" clergy who misbehaved and setting them lose in the community?
A: No. There are ample examples in the Bible of needing to balance mission with stewardship. It would be a failure of mission to put individuals with documented weaknesses into situations where they will sin.

Q: What I proposing for the Church community with regard to fallen clergy.
A: Nothing. I am simply sharing where MY head is. I would willingly eat lunch with a defrocked clergyman because I still see them as members of the family and worthy of social interactions. Nobody else needs to climb on board. This essay talks about where I am.

Q: But doesn't the Bible single out sodomy as the most vile and disgusting of sin?
A: All sin is repugnant to God.

A counter-argument can be made that the story of Sodom and Gomorrah is even more about failures of hospitality. Sojourners from the desert enter Sodom and Gomorrah in a weakened state and the residents sexually abuse them. To use a man (male) for sexual purposes was to steal his claim to humanity, to virtually steal his soul. He was now a woman.

As always, your mileage will vary.
Posted by Eaton Rapids Joe at 2:50 PM