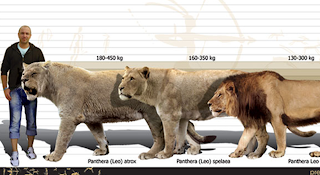 Panthera leo atrox went extinct about 11,000 years ago. He was big. The largest specimens tipped the scales at a thousand pounds. Those estimates based on bones found in California.


From outside of upper fang-to-outside of upper fang measured about five inches. Never having looked closely at lion dentition I was surprised to find that the teeth follow a straight line from fang-to-fang. In my mind's-eye I expected them to be rounded in the plan view. 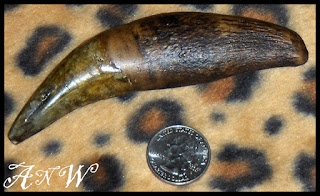 Upper canines were typically five inches long with two inches protruding from the gums and an inch in diameter at the base. In cross-section they were not actually round being slightly larger fore/aft than side-to-side.
Posted by Eaton Rapids Joe at 8:30 AM