Mrs ERJ and I went to a maple syrup boiling. 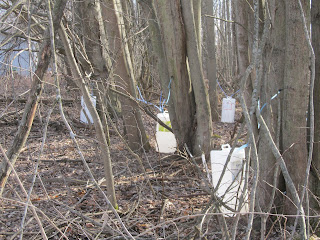 The process starts here. Those are soft maple, aka, silver maple. Some of the trees that the host tapped were standing in water. Well, at this time of year that would be ice.

The host shared with me the importance of using FLOATATION tires when you use a tractor to collect sap from the trees growing through ice. It is very expensive to call a wrecker when your tractor falls through 200 feet from solid ground and you don't have FLOATATION tires. Not that he would know. 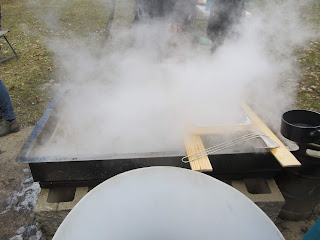 The sap, which comes out of the trees as clear as water goes from the white barrel in the foreground where the chill is removed. Then it goes into a warming pan, suspended by the wooden slats on the right side of the boiling pan. From the warming pan it dribbles into the boiling pan via a calibrated pinhole.

When the warming pan runs low, more sap is ladled into it from the white barrel.

The boiling pan is 24" by 48" and was constructed out of stainless steel.

Everybody's system is a little bit different. The Captain uses two metal tubs that both rest on the cinder block stove and a chimney to pull a draft.  He finds that he burns less wood because all the hot is ducted under his pans. Also, his warming pan is really a pre-boiler.

The host used through convection and let the wind blow through.

Kids were abundant. Sap boilers are a fertile bunch. All of the kids seemed to be smart enough to play far away from the fire...at least the surviving kids were smart enough. Most of the girls were playing with hula-hoops and jumping on a trampoline. Most of the boys were in the house playing video games. 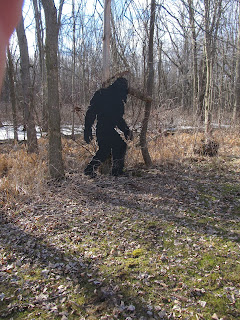 My host claims to have discovered the secret to fertilizing morel mushrooms. He claims that sasquatch urine is the secret. He always finds a big flush in front of Suh.

Posted by Eaton Rapids Joe at 9:06 AM