One of Satan's greatest accomplishments has been to convince us that faith is binary and even the tiniest bit of doubt taints faith beyond redemption.

My belief is that most people believe in something called "science". Would we discard "science" as cavalierly as we toss "faith"?

OK, if you REALLY believe in quarks then you can name all six flavors of quarks.

For those of you who are now convinced you are doomed to science hell, the six flavors are up, down, strange, charm, bottom, and top.

But don't worry, since you don't believe in science you are not subject to the rules of science. You can fearlessly jump off tall buildings, poke holes in your aorta, consume organophosphates in abundance and provoke red-heads without fear.

How much do you believe in science? If pressed, you would probably agree that it is a handy way to grip the universe even if you are not conversant in every detail of what is commonly called science. 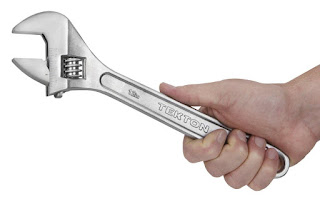 I am a simple guy. Using science as an analogy, my faith is not a Large Hadron Super Collider. It is a 12" adjustable wrench. What it lacks in sophistication it makes up for in versatility.

Yes I have doubts. No, my faith is not perfect. But neither is the wrench pictured above.