The impact of illegal immigrants on CO2 generation

It is relatively simple to calculate a lower-bound on the impact. 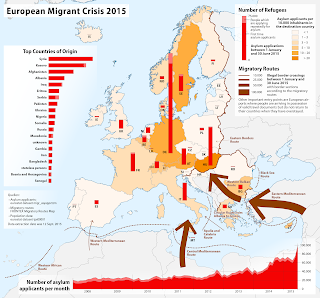 First time asylum applicants for the EU averaged a half million per year for the last ten years.  Assuming a 2X factor to gather in those who failed to apply for asylum and for those who arrived before 2008, that suggests that there are a minimum of 10,000,000 refugees in Europe.

Criticism
Not every immigrant will achieve "average" fuel consumption.

Response: Only petroleum was considered in an attempt to have offsetting "errors".  Adding in coal and natural gas would increase the carbon footprint considerably.  If you want me to comprehend the effects of the lower economic status of immigrants I will include the use of coal and natural gas.  Just by way of comment: I see more immigrants driving old pickup trucks and Buicks than Prius.  Just saying.

Criticism
Why Germany? They have the highest petroleum consumption of Europe. You are skewing the results.

Response: Germany is the number one destination of refugees because of the strong economy.  Therefore I chose them as a proxy for all of Europe.  It should be noted that Syria is the number one originator of refugees and they have a much higher base consumption of petroleum compared to, say, Nigeria.  The "from" number is much, much closer to Syria than Nigeria.

Criticism
You inflate the number by using a decade time horizon.

All time horizons are arbitrary.  How long do refugees stay?  A day? A week?  A year?  A decade?  Which comes closest to the real answer?
Posted by Eaton Rapids Joe at 5:35 PM