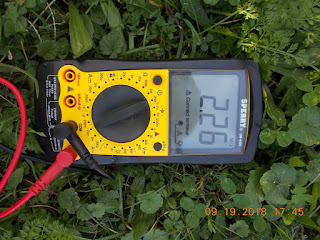 I put a multimeter on the fence where there is a gate.  That way, I was able to measure the resistance of the wire and connections for the system for the entire perimeter.

My multimeter measured 2,260,000 ohms.  For a frame of reference, I measured the resistance of my body from thumb-to-thumb and came up with 1,500,000 ohms. This information is useful because it tells me that even if no power is lost to shorts-to-ground via vegetation, less than 40% of the energy the charger puts out (using a constant current model) is available to excite the body touching the wire.  Using a constant voltage model the available energy is much, much lower.

This line problem-solving will be continued with pictures at a later date.

Mistakes were made
Have you ever left a wee, bitty length of twine hanging over the tailgate of your pickup? 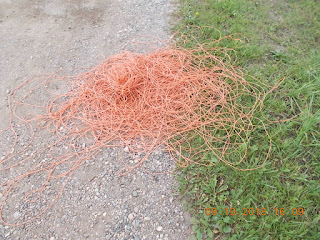 That is over a 1/4 mile of baling twine.  And yes, it was mine.  Fortunately it patiently waited in the center of Canal Road until I came back that way.

My arms got tired pulling it back in.

Suspensions
The minivan is in the shop.  New struts, shocks and stab-bar hardware are going to run about $1100.  Then a new set of tires for the winter.

I was moping around the house thinking about how much that was going to cost when Mrs ERJ suggested we go to the store to buy a few groceries.

I stopped for gas on the way back home and the fellow pumping gas next to us had a new truck.  New as-in two weeks old.

He spent more on replacing perfectly good "factory" tires, $1600, than I spent for my truck.  I paid $1350. My eyebrows must have gone up because he commented, "They have some great rebates out right now."

I don't feel so bad about dropping $1600 on the minivan to get another three or four years out of it.  Imagine, $1600 for tires!  The "factory" tires did not have tread that wrapped up the sidewalls and did not look "cool" enough.
Posted by Eaton Rapids Joe at 8:29 PM