Knock, knock, knock.  "I need to talk to dad!"  It is Kubota's voice and he sounded agitated.  It was three in the morning.

I pulled on some clothes and join Kubota in the hallway just outside our bedroom.

The words tumbled out of his mouth. "I had an accident."

I look him over.  He appeared uninjured.

"I hit a deer.  A buck." Kubota continued.  Out here there is no such thing as a generic "deer". That would be like a NASCAR fan failing to identify a Chevy or Ford or Dodge.

"I saw a doe cross the road so I slowed down." Kubota said.

I was thinking, good plan!

"...and the buck ran into the side of the truck." he finished.

I didn't know why he had to wake me at three in the morning. And then he enlightened me.

"I was driving your truck."

Maybe it is a good thing that I was still processing a little bit slowly.  Or maybe it is because I have been praying more, a side effect of spending more time with my elderly parents.

The words continued to gush out of Kubota's mouth. That was a little bit odd. Most of our conversations are monosyllabic.

"I ran out of gas over by Charlotte so I walked back home to pick up a gas can.  I used your truck to run to the gas station to buy some gas. I hit the deer on the way back to my truck."

Kubota has a copy of my key and my permission to use my truck for "emergencies".  He was shitting razor blades out of fear that I would not consider a vehicle abandoned beside the road enough of an emergency.

NO WORRIES!  How much damage can anybody do to a $1300 vehicle? Nobody was hurt. The buck ran off. 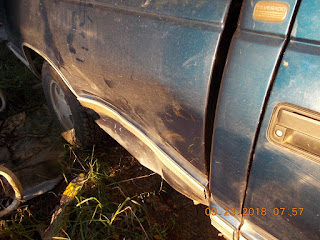 Heck, that is not damage. That is character!
Posted by Eaton Rapids Joe at 8:17 AM