I had a boss in the mid 90s named Jim Zubkus.  Actually, he was the boss of the entire facility and I was about six levels lower in the organization.  That may sound like a lot of layers but you have to know that the facility employeed 17,000 people at the time. 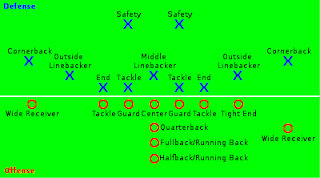 Mr Zubkus was a member of the 1959 - 1961 University of Michigan football team.  He played defensive end.

One of Mr Zubkus's duties was to hold meetings that are akin to the coach's half time pep-talk. Sometimes it was to steady the team.  Sometimes to give them a pat on the back. Sometimes to kick ass. Usually, it was a mix of all three.

Invariably, the meeting would conclude with Mr Zubkus reminding us to focus on the basic "blocking and tackling" of our daily jobs.

I thought all "big bosses" spoke that way but I have rarely heard it since.

Blocking and tackling is not glamorous.

Blocking and tackling is not "creative".

Blocking and tackling are impact events.  They make your body hurt for days afterward.

Blocking and tackling must be done perfectly on every play.  Sloppy or "tired" blocking or tackling on one play has dire consequences.

I suck at blocking and tackling
I suck at weeding my garden.

I suck at keeping vegetation off my electric fence wires.

I suck at maintaining things.

I have a lot of room for improvement.
Posted by Eaton Rapids Joe at 6:57 AM