As reported earlier, the electric fence charger for my pasture was DOA this summer.


The charger is in a small barn north of the pasture.  The garden and orchard are between the charger and the fence.  Since I don't like walking into "hot" wires, I elevated the wire with a flag pole.  Consequent the feed wire is quite high relative to the surroundings.  It is a natural lightening rod.

The Captain bought a small electric fence box to power up the fence.  It is rated at 0.3 Joules.  Even if my fences were perfect it would be barely adequate.  As it is, there is much vegetation touching the hot wires creating "soft" grounds.

One of the things I could do to help was to install a new "ground".  I knew the old ground was bad because I could hear the underground wire "ticking" during dry weather.  I think the wire was a victim of aggressive tilling in the garden.

This is the plan I am working to.  I started with just one rod because the ground is moist and and I don't need three of them, yet.  Plus, one ground rod that is well installed is better than a broken wire six inches beneath the ground.

I had a problem with rocks. The first three places I tried to drive the rod failed.  The fourth place I started the hole with an Iwan auger to 42".  I was able to spud out the rocks near the surface. Then I filled the hole with soapy water and let it soak in. The rod went in like a greased eel. The white powder in the photo is barn lime as I found myself short of loose dirt to refill the post hole.

I must say that I think the fence is much, much hotter.  Of course I did not tell the Captain that... 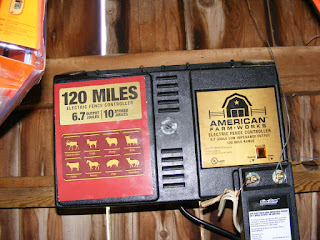 ...I also upgraded the fence charger.  The Captain is probably the best neighbor I ever had.  It would be a shame if his cattle got out and somebody had a traffic accident as a result.
Posted by Eaton Rapids Joe at 6:19 PM