I was gifted with a honk of the horn and the bird today.

The young driver took exception to my turning right on green.  She was traveling in the opposite direction and turning left.  She entered the intersection after I did.  She was pissed that I was occupying the space she was sure belonged to her.  Maybe her brakes did not work. 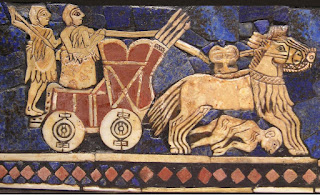 Older drivers have been lamenting young drivers since the days of ancient Sumer.  It is a fine tradition.

However, I think is worse than when I was young.  From a very young age we absorbed the protocol for who had the right-of-way.  We watched the "body English" of other drivers.  There was nothing else to do when riding with your parents.  Now kids are completely absorbed with their electronic toys.  They are clueless, absolutely clueless about who can go when.

They also get lost traveling to the closest shopping mall.  How hard can it be?  Drive north until you hit M-43.  Turn east.  It magically shows up on the north side of M-43.  Every.  Darned.  Time.  That is it.  One turn.  The mall does not move around.  And they still get lost.

I can only imagine the young lady steaming, "He should have let me go first...I had my signal on!!!"

It should come as no surprise that the front of her car was already pretty banged up.  I did not worry too much.  My truck is old enough to vote.
Posted by Eaton Rapids Joe at 4:41 PM