A trip to the Dentist


We had three inches of snow last night.  Kubota went all drama-queen and insisted that school was going to be called off.  I got him to school, but ten minutes later than usual.

Everybody's brain turns to oatmeal when it snows.

My perspective is warped because I have REAL snowtires on our vehicles.  Trying to squeeze every last mile out of a set of tires is false economy.  The car in front of me was driving 35 mph in a 55 zone.
I was ten minutes late for a 7:45 AM appointment.  Everybody in the office was waiting behind the reception desk to see if any patients actually made it in.

The procedures became more complicated than originally planned.  Dr Stone was unflappable.   He was calm, polite, courteous even though one of my teeth looked like a glacier that had calved a small iceberg and the wearing surface was grossly undermined.

He even apologized for the chaos of the remodeling.  I looked around and could see no signs of construction.  I suspect he meant that he had added another dental hygienist.  Did I mention that his staff is not only cheerful but that they are extremely easy on the eyes?

Confession
I made a strategic error.

I pray when I am having my teeth worked on.  I say Hail Marys and Our Fathers.  I pray for the souls of the dentist and his assistant.

If I had the foresight to go to confession before going to the dentist, I bet I could have gotten those prayers to count triple!

Joking aside, if you can pray when you are having your teeth worked on you can probably pray any where, any time.  It is good practice. 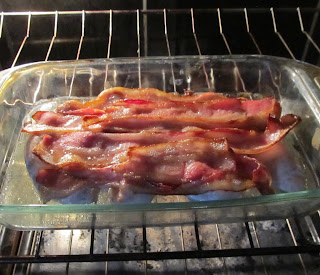 It is good to be home.  I have chicken fingers baking in the oven.  They are topped with bacon.  The bacon is hissing and starting to crackle.  I am looking forward to being able to eat food without having shreds of it wedge between my teeth.
Posted by Eaton Rapids Joe at 10:45 AM