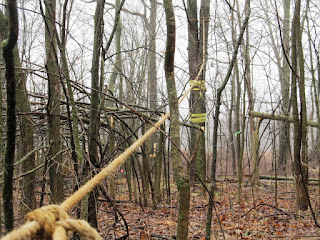 I learned something while I was working in the woods with Salamander last week.

He supplied the ropes we used to guy the trees we were cutting and to direct the direction of their fall.

He stores them as what he calls a "Daisy Chain".  When I asked him about it he gave me one of those, "Gee, doesn't everybody do it this way?" looks.

I need two videos to show what Sal was doing.  This video (six minutes long) gives a great lead in but his method of making loops is more awkward than the way shown in the second video.

This became an issue as Kubota and his friend use extension cords to power battery chargers on various POS, motorized toys.  They also use ropes and tow straps to extradite those same POS motorized toys out of mud, swamps, ditches and so on.  Few things weaken a rope more quickly than giving it a huge JERK while there are knots and snarls in the rope.

I learn something new every day.  My only concern is that I am forgetting four things to make room.
Posted by Eaton Rapids Joe at 6:53 PM