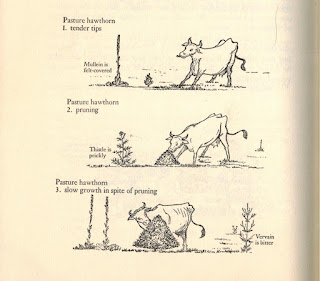 Guilds
In Permaculture, a Guild is "...a grouping a plants, trees, animals, insects, and other components that work together to help ensure their health and productivity."

One guild that occurs naturally in Eaton County, Michigan is the Hawthorn-Herbivore-Vine guild. 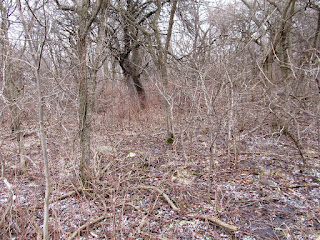 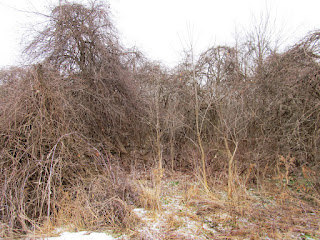 Inside it looks like this
The herbivores, be it deer, horses or cattle, suppress the growth of plants that are not thorny.  They also poop and pee after loafing/bedding beneath them thereby importing fertility from surrounding areas.

The herbivores feel safe.  They are secluded and predators cannot enter from downwind without making noise.

The hawthorn also offers outstanding nesting sites to song birds.  In prime habitat it is not uncommon to see three nests in one medium sized hawthorn tree.

The birds patrol the branches of the hawthorn and vines (usually Vitis riparia around here but sometimes Vitis aestivalis argentifolia on the driest sites) for insect pests and aphids.  They also import fertility just like the herbivores.

The birds forage for weed seeds and worms around the edges of cow pats.  Often, they will defecate before they take flight, planting some hawthorn seeds in new habitat.

This habitat just screams "Deer".
I am going to suggest that we nudge the "hinge-cut" area in this direction.  There are already many hawthorn saplings and vines in place.  All we have to do is NOT cut the hawthorn inside the hinge-cut/bedding area.

One of the advantages of a natural guild is that they maintain themselves with very little effort on our part because the parts are mutually reinforcing.

Hawthorn are a difficult genus to identify because they hybridize and the leaves change shape based on soil fertility and sun/shade.

Fortunately, it is not important to identify exactly which species you are dealing with.  I think any one of them will work in this application.

Most of the ones in Eaton County are distinctly third rate.  They leaves are vulnerable to every foliage disease known.  They don't produce much fruit and what they do produce is not impressive by human standards.

If you were starting from scratch because you did not have any native hawthorns....Arnold Hawthorn grows well and tastes good enough to make pies with.  Cockspur Hawthorn tends to have better-than-average foliage health, the fruit is persistent and the thorns are ferocious.  Crategus pinnatifida produces large fruit and was used in traditional Chinese medicine.  C. opaca makes excellent jelly and is hardy in Michigan.  C. opaca can also withstand the roots being immersed.   Washington Hawthorn and "Winter King" (C. viridis) are easily found in commerce.