Do you have a Plan? 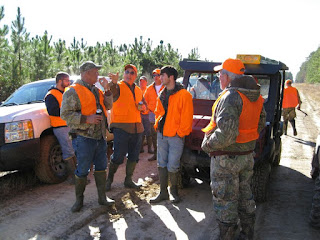 Do you have a plan?

The first question should be:


Do you know what a plan is?

A plan is a story.

And my mother, a former English teacher, will gladly tell you that a story must address
And then it is a story...or a plan.

The order can vary.  Some stories will put more emphasis on Why or How.  But a complete story, a complete plan, must hit all five "W"s and the lonely "H".

My awakening
I was involved in an equipment installation in an industrial plant during a long weekend.  I think it was Thanksgiving weekend.

The company brought in full crews of skilled trades on all three shifts and paid them double-time.

It occurred to me as I watched the train wreck unfold that my brothers and I had better planning when we executed "deer drives" than the best talent in this Fortune 500 company had for the four day weekend.


We did not consider it overkill.  Every one of us was capable of heaving a one ounce chunk of lead at 1600 feet per second.  Mistakes are expensive.

It took me a while to wrap my head around the fact that a handful of "rednecks" absolutely crushed a bunch of hot-shot corporate executives in planning.  But it was a fact.

The single biggest gain came when each shift was assigned specific robots/equipment to program/prepare.

What had been happening was that each shift would come in and review the work done by the previous shift.  Then they would delete the programming because it was not exactly they way they would have done it.  They would download the programs they had saved on thumb-drives at the end of their shift the previous day.

At the daily meeting, the leaders would contend that they had no idea what the MFers on the other two shifts were doing because not a lick of work had been done in the previous sixteen hours.

The post mortem of the weekend was ugly.  Very, very ugly.

A good plan has clear assignments.

Deleting the work done by other shifts is industrial sabotage.  It was done very casually before the leaders got religion about planning.  It was perceived as "being fussy" which is generally a good thing.  It was not perceived as throwing away $20,000 of labor and frittering away one of the few four day windows of opportunity.

Later installations required that each shift "lock out" the specific equipment they were responsible for.  There was no way other shifts could mess with it.

Leadership's mentality had been that shifts that finished early could work on other shift's work.

Reality proved that there are many things that are worse than a work crew that gets done early.

Just remember:
And my mom will be proud of you.

Do you have a Plan, Part II
Posted by Eaton Rapids Joe at 2:14 PM