There is an old saw that goes something like this:  "Cadets debate strategy, junior officers debate tactics and generals lose sleep over logistics."

Staying alive is a matter of keeping your logistical tail as compact and as continuous as possible.  One way to do this is to have "production" move to secured areas close to the front. 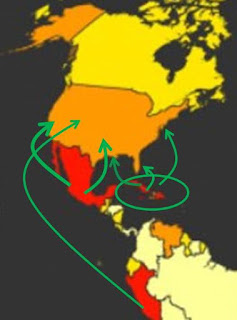 They would do what the Jewish people did after leaving Egypt and wandering the desert for two generations, they would move into the land of milk-and-honey.

Muslims are no more militant than they were 30, 300 or 1300 years ago.  What is different is that they are experiencing the unpleasant side of population over-shoot. 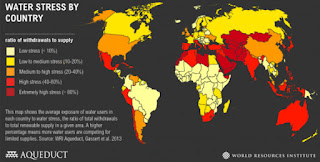 I was surprised to see China is only listed as "Medium to high" stress.  My perception of China's water challenge is that the areas that are richly endowed with water have virtually no slope/gradient.  Much water but little flow, a bit like the Florida Everglades but with 900 times the area.  Minimum flushing effect means that pollutants build up.

The other half the challenge is the other areas are environmentally degraded, erosion is continuing and the climate is "brittle".  Sometimes it rains.  Some times it does not.

We live in interesting times.
Posted by Eaton Rapids Joe at 2:05 PM