The "Parking Meter" function of pricing

Committees planning High School Graduations are in a no-win situation due to the perversity of human nature. 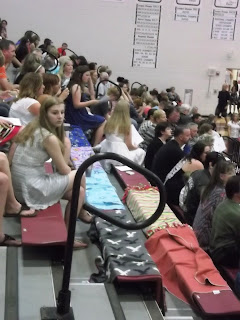 We showed up an hour early and this is what I encountered.  Some family spread multiple bleachers at the mid-court line with blankets to "reserve" them.  Other families used duct tape.

The weather was hot and muggy.  Notice the number of people fanning themselves in this short video clip.  Also, the young lady pinning up her hair immediately in front of the camera.  Everybody was cranky.

The most aggrevating thing was that people saved seats for friends who did not show up.  Even sadder were the cases when their friends were in the gym and also saving a block of seats for their "posse".  Parents were denied good seats because of the lack of an orderly market.  A finite resource was poorly allocated.

A good economist would not complain.  He would see this as an opportunity.  He would show up when the doors opened with as many blankets as he could carry.  He would "reserve" the prime sections of bleachers and then auction them off.  In effect, the entrepreneur would create an orderly market and would put some money in his pocket at the same time.

That is, he would would fill a function when "government" failed.  Some folks call these entrepreneurs "scalpers" but they are really resource allocation arbiters.

I suspect that Mrs ERJ will not let me do this next year.  People get testy when they are denied access to "free stuff" that they assume they are entitled to.  The scalper runs the risk of getting punched in the nose....although even that can be a revenue opportunity.


The committee cannot win.  If they place a nominal price on the seating....say five bucks a seat, they will get howls of protests from the entitlement crowd.  And I freely admit that those of us who are retired and on fixed incomes are the loudest howlers.

If they continue with the "first come, first serve" policy they will have pissed off parents and working folks.  Parents are pissed off because they typically juggle the needs of multiple kids and they are not in a position to arrive 90 minutes early...especially when they have small kids.  Working folks are often hard pressed to get out of work, commute home, take a shower and get to the event on time.