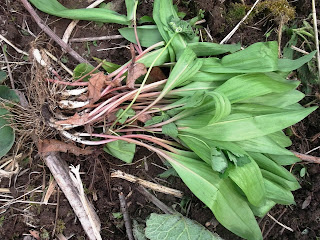 I am a lazy gardener.  To my mind, the ideal fruit or vegetable is one that, once planted, requires no attention until it delivers itself to my outstretched palm, skewered on a kabob, neatly pre-wrapped in a burrito or serves itself in a tall, icy-cold tumbler at precisely 5:30 PM EST.

One way to move toward that ideal is to place plants in their preferred ecological niches.  Most fruit trees are "edge" species, so mimic the exposure that they most prefer.  Then they will compete quite handily with other species.

Most garden vegetables are annuals that exploit disturbed, exposed soil.  Unfortunately, most weeds are the same.


I think every gardener finds themselves looking at an odd corner wondering just what the heck to do with it.  Plant species for such corners tend to be limited and not aggressively marketed.  My odd corner is north of our house.  The spoils from the basement were leveled out and seeded to lawn.  Later, fruit trees and Viburnum x juddii  were planted along the cusp of the grade.

The Captain solved my problem 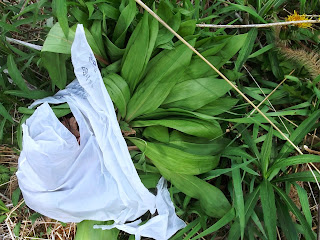 While looking for morel mushrooms he stumbled across some heavy stands of ramps, (Allium tricoccum).  He took some of them home and they were among the tastiest he ever ate.  They either benefited from a particularly benign micro-clime or he caught them at the very peak of flavor or they are genetically superior.

The Captain is mildly amused by my preoccupation with plants.  I told him that I was attempting to establish ramps on my property.  He brought me a bag full of these super-duper ramps.

And then it hit be between the eyes.  My problem child was a nearly perfect place to plant ramps!


It is a simple fact that a beam of sunlight can only be harvested once.  Woodland ephemerals neatly solve this problem by going "up-periscope" for a very short period of time in the spring before the trees leaf out.

A great many of these ephemerals have bulbs or fleshy rhizomes.  They store up food so they can come bounding out of the ground like a jack-in-the-box next year.

They do not spread quickly because they are only actively photosynthesizing for 4-to-8 weeks.  They are particularly vulnerable to feral hogs because the hogs' ecological niche is to root out (guess where that word came from) edibles from the soil.  The hapless plant spends 5 or 7 years building up food reserves and a group of hogs can devastate an acre in one night.

Ramps have an unusual flowering cycle.  They throw up a single, wide blade that looks almost like a Lilly-of-the-Field in the early spring.  They photosynthesize and then shut down.  Then, in late June (around here) they throw up a spike that flowers and sets seeds. 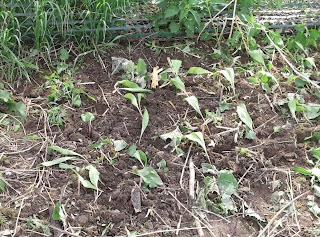 I planted the individual bulblets on about 12 inch centers. My hope is that they will fill in.  I planted them in the shadiest spots.


The Captain assures me that one can make an excellent vege-wrap with just ramps.  Clean five of them well, both bulbs and leaves.  Stack the five ramps so you have a layer of leaves five deep.  Bend the leaf stems so the bulbs are sitting in the middle of the leaves.  Microwave briefly to make leaves limp.  Sprinkle with peppered vinegar and maybe a dot of butter or a sprinkle of cheese.  Wrap leaves around bulbs and serve.
Posted by Eaton Rapids Joe at 7:03 PM