I am done grafting the persimmons.  I still have some scion wood in the fridge "just in case" something comes up.  But for all practical purposes I am done.

I belong to an organization called NAFEX.  It is the North American Fruit Explorers Association.  They publish a magazine four times a year and have an email list.  Some truly outstanding writers contribute to the NAFEX publications.

One of the authors wowed us with his discovery that the common, kitchen refrigerator can be used for advanced genetic engineering.  He dubbed the creations spawned by this process "refrigerator hybrids."

The only requirement is that the grafter, or the person collecting scion wood for the grafter, harvest two or more varieties of the same species and to store them in the same refrigerator.


The refrigerators of home hobby growers seem to be the most prolific generators of "refrigerator hybrids".  The author speculated that the cozy spaces of the bottom shelf are more conducive to snuggling than large, commercial refrigerators.

"Refrigerator hybrids" are not a big deal for precocious fruits like peaches and plums, nor Liberty or Golden Delicious apples.  The genetic drift is caught soon enough, while the trees are still short enough, to easily top-work them into the non-refrigerator hybrid cultivar (cultivar = cultivated variety).

Nut trees, however, are an entirely different kettle of fish.  They are usually much slower to come into bearing and mistakes in identification throw a much longer shadow.  More time is invested in the tree.  Top working them to correct the problem usually involves working from a ladder.

The lack of precociousness has another implication.  A collector will likely be collecting scion wood from a tree that has not born nuts....and is therefore unvalidated.

That is why I was top-working some trees with some trepidation.  I cut the scion wood from a tree that has not borne any nuts so there is no verification that "refrigerator hybridization" had not effected this tree..  It is supposed to be a variety called "Sparrow"....unless that funky genetic shift thing happened in the refrigerator.

Was I wearing my anti-gravity boots? 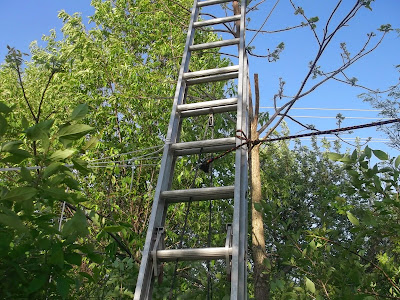 I plan to do some grafting on some more "whippy" trees later next week.  This was a good test of tying off the ladder.

I sure hope the scion wood I am throwing on those trees really is "Sparrow".  Check with me in four years.  I should know by then.