One gallon of paint, 500 sq-ft revisited


An earlier blog post dealt with allocation strategies in times of scarcity.  This post differs from the earlier essay by offering a slightly more mathematical perspective and by focusing on some real-world examples.


Karst is a landscape formed from the dissolution of soluble rocks including limestone, dolomite and gypsum. It is characterized by sinkholes, caves, and underground drainage systems...(Except in Ohio where a karst is something a doctor puts on a broken leg.)

The principle driver of Karst is the fact that the capacity for water to dissolve limestone increase when two, saturated solutions mix.

Take a close look at the curve shown above.  Graphically, one can draw a straight line between any two points on one of the lines to calculate the amount of Ca+ in the water.  The solubility curve is above the straight line which informs us that there is potential for the solution to dissolve more CaCO3...if it is available.

So visualize the top of the water table in a layer of limestone.  Then, imagine water percolating through the top-soil, picking up CO2 and humic acids and Ca+.  Where the downward percolating groundwater meets the watertable, the two streams will mix, thereby increasing their potential to dissolve limestone.  A cave will form.

Since the level of the water table fluctuates the ground will start to honeycomb.  Caves will collapse causing sinkholes.  Rock will fracture.  These large, interconnecting cavities have the result of limestone country being very well drained.  In regions of ample rainfall like France and Kentucky, that is an advantage.  In more arid regions like Israel it means that the water table drops like a rock when there is a drought.

Crop response is another "concave down" curve.  Perhaps it is obvious, but spreading 400 pounds/acre on half of the field and 0 lbs/acre nitrogen on the other half will result in less total yield than evenly spreading the field with 200 pounds of nitrogen per acre.

According to the book, Farmers of 40 Centuries, farmers in China take this concept right down to the level of the individual plant.  They slosh a little bit extra fertilizer on the plants that look neediest.  Many centuries of observation and the need to maximize the production of every square foot of land has made this part of their culture.  Some observers point to this as one of the reasons for East Asians' proclivity for conformity.  "The nail that sticks up will be hammered down."  It may also contribute to Japan's phenomenal ability to get every worker to perform work exactly the same way.  It is a part of the culture.

In an environment where resources are limited, the winning strategy for physical problems that have a strong "concave down" response is to ensure that every player gets identical resources.


Not every phenomena shows a concave down response.  Many phenomena have a "factorial" mechanism somewhere within their guts. 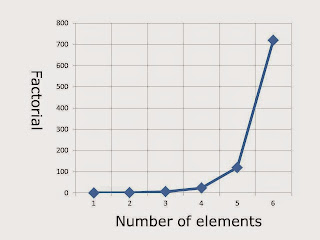 It is also useful in modeling networks, communications and technology growth.

In an environment where resources are scarce, the winning strategy for systems that demonstrate a "concave up" response is to invest all of the resources into the most responsive part of the population.


One operative definition of intelligence is "the ability to identify and retrieve relevant information quickly enough to influence events."  Implicit in the definition is that the intelligent person will be able to properly manipulate the information, once retrieved.

The reason this is a useful definition is because intelligence and memorizing is not so much an issue of packing the information in....it is a problem of being able to find and retrieve it.  Even the dullest of knives demonstrates amazing memory capacity when afflicted with  Alzheimer's disease.

The solution to the retrieval challenge is two-fold.  One is to create well-worn neural paths to the information.  The other is cross-linking.  The cross-linking armors the mind against forgetfulness as faded links can be bypassed.  The memory search can percolate around the faded or collapsed channels.

The paradox of memory is that human memory grows faster than the information being put into it due to the factorial nature of information networks.  There is an important caveat attached to that statement:  The information must be logically coherent so the brain can form consistent links between channels.

One of the reasons, IMHO, that populations with delayed biological maturity show higher aggregate intelligence is that puberty is accompanied by cognitive and attitudinal changes.  I.e., you cannot tell them anything.  Consequently, mentors have a longer period to point out the channel linkages and inculcate the fact that memory does not act as a finite resource.

If one were to map the "intelligence" of those populations that demonstrate early physical maturity it would look like the grooving in pavement to channel water away:  Shallow, parallel and often eroded into oblivion.


It is important to note that Marxism was invented at the beginning of the Industrial Revolution when there was no visible limit to growth.  Consequently, it was possible to formulate political systems and social policies that naively ignored the need to efficiently allocate capital.  There are still policy makers living in that fantasy world.  "No Child Left Behind" is a good example.  What is the capital efficiency of preparing every student for a four year college degree

More importantly, what is the cost to society when resources are squandered on the 75% least able to benefit from attending college?