Obama is a righteous dude

I was talking with a gentleman who expressed surprise that anybody disliked Barack Obama as the President of the United States of America.  In his opinion, Barack Obama saved the country.

I asked for the gentleman's reasoning as this is not an opinion I share.  I try to keep an open mind.

He saved my Pension!


His reasoning is that Barack Obama personally saved his pension from insolvancy.

He had recently received a letter in the mail that looked similar to this one: 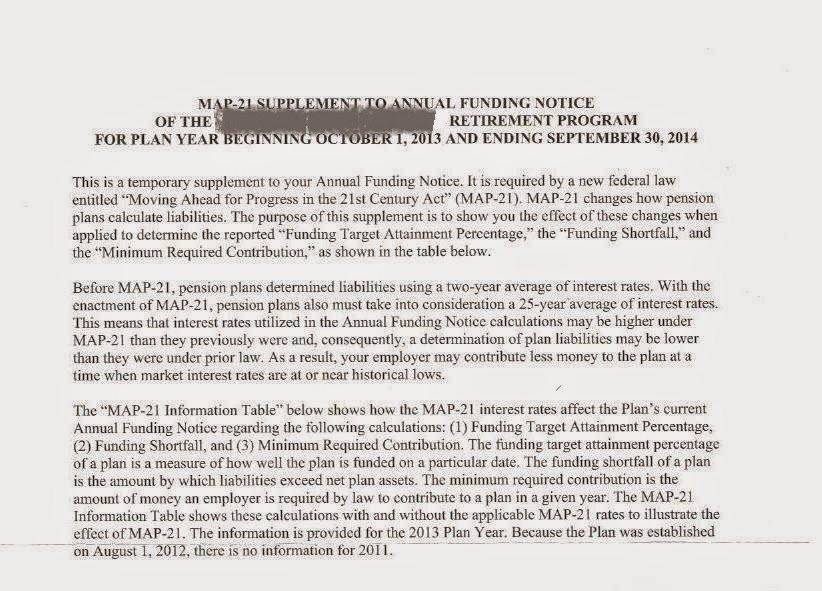 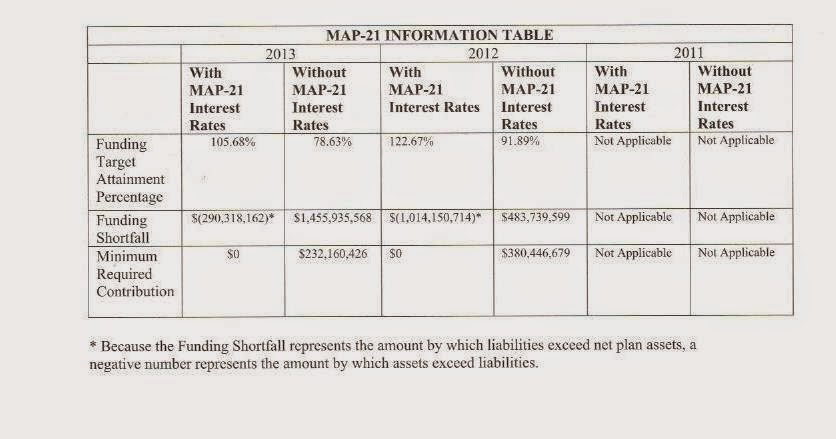 To save you the eye strain, this letter informs the reader that a new Federal law titled "Moving Ahead for Progress in the 21st Century Act" allows pension funds to use a less stringent standard when computing whether they are "fully funded" or not.  With the stroke of a pen, this plan went from 79% funded to 106% funded without a single penny being added to the fund.

Central bankers have been goosing the economy by flooding the markets with "liquidity", that is, printing electronic money.  That drove interest rates down to unprecedented levels which means that the investor, the pension plan, needs significantly more money invested to generate a given amount of money to disperse.

One effect of the lower interest rates was to force fund managers to pile into the world stock markets in a desperate attempt to bolster returns.  That caused the stock market to go way up...which was one of the intended effects of the Central Banks manipulations.  The public would not know a basis point if it bit them on the nose but they can recite stock market gains after their third martini.  So the Central Banks and the politicians in office look like heroes.

Central banker manipulation's effects on the stock market are a classic case of Potemkin Villages.  Resources that could have been efficiently allocated to productive ends were diverted to produce the illusion of progress.

Commercial markets (office properties) are overbuilt and have a broken price discovery mechanism.

From the Pension fund manager's perspective


The economy is still pretty cheesy.  Federal law regarding the funding levels of pension funds flag your fund as being under funded due to the abysmal bond returns.  There are mandatory funding requirements that demand that you invest large amounts of money into your pension fund but the spongy economy means that you do not have loads of cash to sink into the fund.

Actually, the mess was not cleaned up, it was displaced.

In 2006 there were changes made to the laws regarding the cash-out of pensions.  One of the provisions of the 2006 legislation was that pension funds can initiate liquidation proceedings and force participants to take cash-outs if
Now suppose you are a titan of industry.  Suppose, further, that you have this very favorable funding ruling in hand.  Pulling the trigger on liquidating the pension fund and cashing out the participants using the more favorable (for the company) rules would put $300,000,000 in your pocket.  You would be a fool not to do it.

The problem is thus displaced to the person who used to receive a monthly pension check.  He/she is given a lump sum.  Good luck figuring out a way to invest it to match the monthly check.  Heck, the pension fund managers who were pulling down 7 figure salaries could not do it.  That was the entire motivation for the MAP-21 changes.  But the train cars keep derailing because the consequences of the foundational problems (excessive government spending and mis-allocation of assets) were not addressed.

So my friend is sure that Obama is a righteous dude...for the moment.  He got a letter that said, "Don't worry.  Everything is just fine."

What could go wrong?
Posted by Eaton Rapids Joe at 12:10 AM