Belladonna placed better than her "seed"


Individual "States" competitions in Michigan are structured around "Seeds" and "Flights".

Athletes earn their "seed" in the Regional competitions when they qualify for "States".  The athletes with the least promising performance are grouped into the first "flight". The athletes 11-20 are grouped in the second flight, and so on.   In the case of discus there were four flights of 10 athletes each.

Each flight is run as a mini-competition.  The flight is given 15 minutes for warm-up.  This year each athlete made one throw at a time as they ran from the bottom of the flight to the top of the flight.  Then they made another throw.  And then another throw.  The best of the three throws is recorded.  Each flight takes about 45 minutes to transact, 15 minutes of warm-up and 30 minutes of throwing.

After all four flights are thrown, the top 8 athletes were identified and they formed a fifth "flight" regardless of their original "seed" for a shoot-out.  The placing in the competition is based on each athlete's best throw of the day.

Déjà vu all over again.


Belladonna was in the fourth flight by virtue of a pretty good performance in Regionals.

It started raining while her flight was warming-up. The intensity of the rain picked up.  It was not a monsoon but it was heavy enough so that there was run-off from the gravel access drive.

It was a train wreck for Bella's flight.  Half of the girls were not able to put any of their three throws in bounds.  In general, the disc was slipping out of their hand early.  And the harder they tried to throw the disc the uglier the throw.

I had to walk away for a little bit.  I hate to see my daughter get hurt.  Part of me still thinks of her as an innocent, three year old girl who trusts in happy endings and the absolute curative power of hugs and ice cream.  I was really struggling with letting her be an adult.  I was dropping back in defensive mode.  I was thinking about minimizing pain. Belladonn's response was different.  She made the butterflies fly in formation.  She focused on what she needed to do next.

Perhaps by virtue of having experienced this very thing on Tuesday, Belladonna was able to make adjustments and threw one disc that was "in" and was long enough to qualify her for the fifth flight.  That bought her three more throws.  Only two girls from Bella's flight qualified...and Bella was one of them.  All of the girls who were more highly seeded than Bella scrubbed.  It was a very, very ugly thing.

The rain abated during the fifth flight and she was able to get off a couple of throws that were more typical of her ability.  Consequently, she was able to claw her way up a couple of places and ended up "placing" better than her "seed".  That, in my book, is a victory.  Especially under adverse conditions.

Jo was the secretary at the High School.  Unbeknownst to anyone, she had an aneurism.  It burst in early March.  She died.  She was 53.

Jo was one of those radiantly, effervescent souls who magically convinced each of the 768 students at Eaton Rapids High School that they were her most favorite student.  Belladonna was no exception.  She fell under Jo's spell.

In some ways Belladonna is like a guy.  She thrives on people giving her "crap".  Jo would tell her, "Bella, you gotta throw good today.  I can't make it to the meet...but you gotta throw good for me."  And Bella would throw just a little harder because Jo told her to.

Bella wanted to throw well because Jo could not be there.  It wasn't about Bella.  It was about honoring Jo.


I am proud of my daughter.

I would be proud of her even if she had been 40th out of 40.  But I am really stoked by her selflessness.  I am impressed by her ability to overcome.  She is like an A-10 Warthog:  she is not the personification of "beauty" in the classic sense.  She is not sleek of line nor airily graceful.  But I cannot imagine a more welcome sight were I pinned down in the mud with a multitude of unfriendlies in the near down-range.

Need another half hour of hang-time?.....no problem 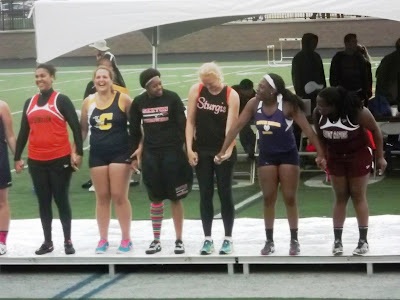 THAT is my daughter.