I saw a lot of pretty country while driving down to Charlotte, North Carolina.

One of the surprises was a nut orchard in West Virginia.  I had no premonition that I would see what I saw.  It was totally unexpected. It was like getting a surprise birthday party on a day that is not your birthday.

Part of what contributed to the shock was the nature of the road.  I was driving south on U.S. 35 which alternates between a limited access expressway and a common, two lane, paved road.

The nut orchard was on the portion that was two lane, paved road.  The road was running up the Kanawha river valley heading southeast out of Henderson, West Virginia.  The Kanawha river valley is broad, and flat and very, very fertile.  The highway runs along the west side of the valley where surface starts to roll upward like the sides of a soup bowl.

I did not have time to stop on the way down because of the pup I was delivering, but I made a point of stopping on the way back. 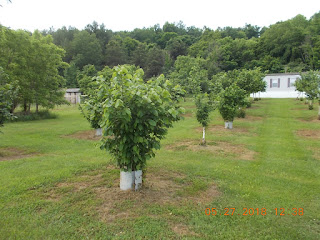 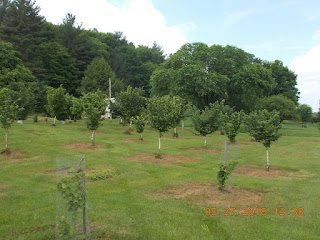 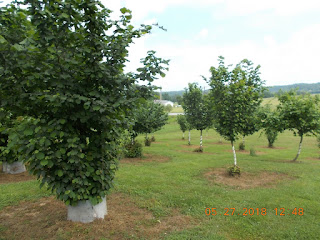 The owner of the estate was in his garden checking his green beans when I pulled into the drive.  I wagged my puppy-dog tail and he agreed to talk to me.

Mr John Kelsey is currently growing about 300 filbert trees and, at the moment, has 36 varieties on trial.  Mr Kelsey said the number of varieties varies from year-to-year.  "I get mad at a tree and yank it out.  Then I plant a different variety to see if it will do any better."

He has yet to find a variety that he considers "commercial" in the Eastern United States.

He took a shine to me even after I misidentified an elm tree for a heartnut tree.

He showed me his work shop.

I was so struck by the depth of the finish on these chairs that I tried to capture how the light played on the wood grain.  It was an uphill effort because of the muddy light coming through the north window.


Then Mr Kelsey showed me some picture frames he was "banging together out of some salt-and-pepper walnut" he had cut on the property.

The reason he started numbering his chairs is because he is trying to ease out of the furniture manufacturing business.  He tried raising prices to tamp down demand, but that did not work.  Doubling the price quadrupled the demand as folks decided they better get their John Kelsey originals before he doubled the price again, or worse yet, stopped making them.

He sounded a little bit disgusted by that turn of events.

He is trying to shift customers over to his son who is no slouch as a woodworker. 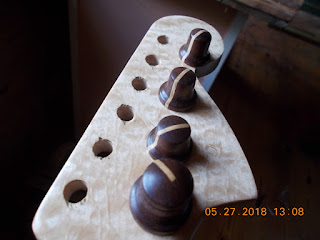 Mr Kelsey takes great delight in "automating" processes.  It is what he did back when he was a working stiff and I bet he was very, very good at it.

The video shows a prototype of a tool he fabricated for sorting nuts by size.  The rollers are closer together at the top where the nuts feed in and are further apart at the bottom. You need to have the nuts sorted for size before you can automate a nut cracker.

He informed me that the drive for this unit was salvaged from a piece of furniture, a "massage chair".
Posted by Eaton Rapids Joe at 7:03 AM