Gary Taylor, a disabled veteran of the National Guard, grew up hunting in the Upper Peninsula and used it as a large part of the healing process for his PTSD and traumatic brain injury.  But after moving to Southgate, he didn't go hunting for six years, scheduling conflicts and a lack of access to hunting grounds in the area got in the way.

For Taylor, the best parts of Michigan Operation Freedom Outdoors hunts are the moments between hunting, when everyone’s mingling, resting or prepping and there’s a sense of camaraderie that develops between everyone there.

“It brings that cohesiveness back that some of us lost when we got out of the military,” Taylor said. “There’s a bunch of guys where our stories make sense to each other and we don’t have to worry about what we say or how it’s going to be perceived because we all get it.” 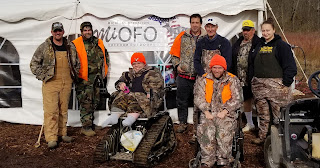 Douglas Goerlitz, a Vietnam veteran, captains a shooting team of handicapped veterans that Michigan Operation Freedom Outdoors sponsors. He also has an all-terrain wheelchair that he lets the organization use it, since he can still comfortably walk around. Goerlitz didn’t want the chair just sitting in his garage until it was time for him to use it.