First, let me tell you about one of my friends
She is a Preacher's Kid.  Henceforth she will be identified as PK.

Some Preacher's kids go wild.  Others stay the course.  My friend, PK, stayed the course.  She is everything you imagine when you think of a good Christian.

She goes to church.  She tithes.  She lives the Golden Rule.  She is welcoming and opens her house to those in need.  She does not swat bees but captures them with a water tumbler and a piece of cardboard and releases them outside.

PK and I are very different politically.  She is aghast at the idea of owning a gun whereas I used to own several before Mr B and I had that terrible accident near Lafayette, Indiana.  (It serves Mr B right that he lost lost all of his guns, too.  I told him to check the tie-downs, but no, he said "Bungee cords are just fine.")

PK's property wraps around her new neighbor's property and they share about 500 feet of fence.  PK thought nothing of it.  She kept doing all of the things she normally did...

...And then...
The harassment started.

Part of what freaks her out is that her new neighbor has a history of coming this close  ->||<- to brandishing.  He is smart enough to know the law and has never been stupid enough to give neighbors sufficient evidence to complain...but his intent is clear.

PK is not wealthy and her health is in decline.  She trudges onward with what I suspect in an auto-immune disorder.  She does not complain.

The demand/lawsuit for $15,000 for a privacy fence forced PK to retain a lawyer.  Fortunately, there are several who attend the same church she attends and they cut her a break.

Her neighbor claims that he feels threatened by PK's frequent guests.  He has many, many thousands of dollars ($50,000?) of shiny man-toys scattered around his property.  These are the same guests that frequented PK's property before, and while, the new neighbor purchased the property.

After much negotiation, the final agreement ran to fifteen pages of dense, legal boiler-plate.

The resolution involves planting a shelter-belt along the 500' of shared fence on PK's property, at PK's expense.  The contract stipulates that the mature trees (at ten years) exceed ten feet in height.  The trees will be planted at six feet, or closer intervals.

It must be noted, at this point in the story that one of the "acceptable" outcomes originally stipulated by the new neighbor was that 8 foot tall, balled-and-burlapped Green Giant Arborvitae be planted at five foot intervals along the entire 500'.

In return, PK gets what amounts to a personal protective order.  Her neighbor must never talk to her, or complain, or file grievances with the county.... for twenty years.  Competent attorneys will be quick to point out that PPOs are just pieces of paper.  PK's attorney was competent.  Buried near the end of page thirteen was language that triggered liens and transferred substantial amounts of equity to PK if the new neighbor violated his end of the agreement.  Basic property law.

One suspects that the new neighbor is very pleased with himself, having trusted his lawyer to do his job.

I asked PK if she needed any help selecting or finding seedlings for the new shelter belt.

"Really."  I said, exuding professional interest.  "What species did you select?" thinking that she had chosen the cheapest of the cheap.

"Mulberries." she said with a twinkle in her eye. 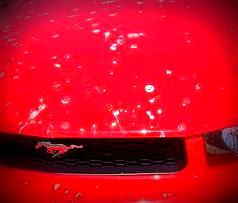