One of my friends has a new neighbor who is as crazy as a shit-house rat.

From my working life I estimate that one person in twenty is not only crazy but they are highly dysfunctional in their interpersonal relationships.  Please remember that this population already had the felons removed so the general population has an even higher percentage of problem people. 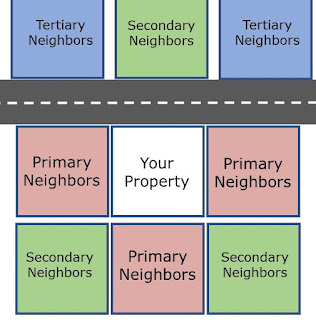 If you figure there is an average of 1.6 adults per household (2010 Census data) than you will typically have 13 adult neighbors if you live in the city.  It is a worse than a flip-of-the-coin that you have a "bad" neighbor.  There is one chance in four that you have a primary neighbor who is crazy.

By crazy I don't mean like your life-of-the-party uncle or your former dorm mate who is an entertaining ding-dong.  I am talking about people who are energized by screwing with other people's lives.

Examples of "bad"?
I have been lucky so far and I thank God.  But in all things statistical, it is simply a matter of time before I get a "bad neighbor."

Having fewer neighbors is one of the attractions of living "in the country".  Property in the country is often a strip of road frontage with agricultural behind it.  The farmer stops paying road tax which is based on frontage and the home-owners get a manageable chunk of property.  Many times there are not neighbors on the other side of the road.