Lucky Gunner has an excellent essay on the Five X Five drill HERE.

Of course, there is nothing that is so simple and elegant that an engineer cannot "improve" it.

I think four paces,  minimum of four-of-five hits, minimum of five shots and always draw from holster at the start of the string with five repetitions.  There is no "right" amount of time but faster is always better.

Targets
My first challenge was the target.

Paper and ink are expensive so I wanted to economize and get two targets per 8" by 11" sheet of paper.

Kubota, my 18 year old son walked in right after I had printed out my first targets. 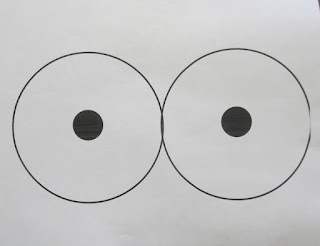 "Does mom know that you have a big-breast fetish?" he asked.

Looking at the targets I saw he had a point.  Besides, the target on the right drifted off the printed area.  No problem.  I will just shrink them to 4" circles and shoot the drill at four paces instead of five. 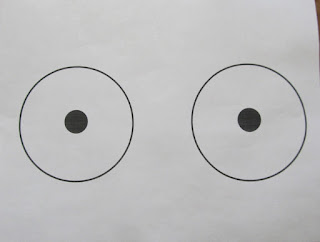 Then Belladonna walked in.

"Dad?  Does mom know that you are perving on 13 year olds?" she asked.

I considered 4" hearts or smiley-faces but you have to consider how these things might play out in court.  In the end I decided that reality was the most defensible option.

Ultimately, you are shooting through the target.  Your effectiveness is determined by the tissue your bullet must pass through. You could do far worse than visualizing the spine and trying to hit near it.  These targets should print out at close to 4" diameter if you print the .jpg on an 8-by-11 sheet of paper.

Five shots, four hits...
Why not five for five?

Because we regress to the level of training that we mastered in times of stress.

Perhaps the most important thing that comes out of the Five-by-Five drill is that it hard-wires our shooting cadence.  How fast can you get back on target before you launch the next round?  The need to hit 100% will needlessly slow you down.

Small target
One of the things I like about the Five-by-Five drill is that it exploits the maxim "aim small, miss small".  Five inches is significantly smaller than the area that will be effectively impact if you ever need to shoot to defend yourself.  Remember, only hits count.

A four inch target at four paces is the same Minute of Felon as five inches at five paces.

The video linked to above shows a car jacking that went south for the perp.

The perp's gun was clearly visible for about three seconds before he yanked the car door open.  The driver had his gun out of his waist band and was shooting as soon as he had a clear target.  The perp ran for about seven seconds before his body stopped working.

Can you draw and aim your firearm in less than three seconds if you were sitting behind the steering wheel of you family vehicle?  This guy did.

Five shots
We play on Friday night the way we practiced the week before.

This is not golf.  We don't hit a drive and watch to see if it hooks or slices.  Our target poses an imminent danger to us or those we are responsible for protecting.  Besides, you are not going to be able to see where the bullet impacts if it is a dark night and the perp is wearing clothing. Ammo is cheap.  Our lives are not.


There is not a magic number of rounds but shooting a minimum of five rounds per repetition should minimize the urge to stop and watch for effect after each squeeze of the trigger.  Heck...I don't even think you should be counting.  That should be the last thing on your mind.

Five repetitions
In the factory we used to believe that operators needed one thousand repetitions before they could do any task without being slowed down by the need to access conscious thought.  Our belief was that "thinking" slowed people down and created errors.

The most learning occurs in the earliest repetitions.  Future repetitions solidify those learnings.

A reasonable way to end each rep is to back up so the "target" is at least seven paces away.  Square up to the target.  Put your handgun at low ready.  Sweep left (near-far) while keeping the perp in your peripheral vision, front (target-near-far), right (near-far), front (target-near-far)... for a minimum of a thirty count.  Yup, one one-thousand, two one-thousand.  Pretend you are windshield wipers if it helps. Counting is calming and it would purely suck for your next of kin to learn that you had holstered your weapon just to have the perp launch off the ground and cut out your gizzard.

We play on game day the way we practiced all week.
Posted by Eaton Rapids Joe at 7:30 PM