How many people protesting guns???

To provide a reference point, the average NCAA Div I football game had 42,200 paying attendees.  So the parade in Washington DC pulled as many attendees as the average East Carolina, Pittsburgh or UC-Fresno home football game (Source) 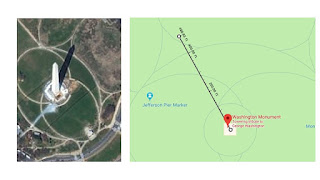 I analyzed the shadow of the Washington Monument that was in the un-cropped picture and deduced that the image was taken at approximately 10:45 in the morning.  The shadow is approximately 490 feet long at the time the image was taken.  Since the event did not officially start until noon, and ended after 2:00 PM, the number of attendees was certainly higher than the 34,000-to-40,000 estimated in the blog.

One highly credible source placed the attendance around 180,000.

In my defense, I am not the person who posted a picture of 34,000 people and presented it as evidence that 800,000 people were in attendance.

Apologies for any sleep you may have lost.