Do you remember when magazines used to run serialized stories? 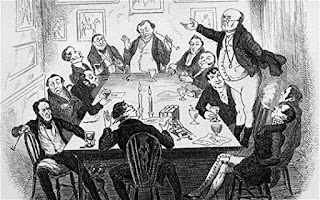 How many of you remember when magazines ran "serial" stories.  They were quite the fad during the late 1800s and early 1900s. They were like soap operas and some of those stories were quite good while some were no better than abysmal.  The practiced petered out as televisions became common.

Many of the serialized stories were written specifically to be published that way.  They were soap operas with a hanger at the end of every segment.  Over the weeks or months the reader's imagination would fill in many of the details that the author left out.

The TV series MASH did an episode where a paperback book was torn into segments and passed from one bored reader to the next as each person finished their piece.  The dramatic tension occurred when the last piece of the book was lost before anybody had read it and the readers had to figure out who dunnit on their own.

The reason I bring this up is because the characters that were in the story Old NFO graciously included in his Calexit anthology kept talking to me.  There is more to their story.  Lacking a venue for the odd length and wandering story-line I am considering dribbling it out in serialized format on my blog.

My question to you, the readers, is...what length of story is most convenient for you?  I don't know your schedules or the visual limitations of your reading devices.  I suspect that shorter is better than longer.  The material does not have regularly spaced "hangers" since it was not originally written for serialization so the length of each installment can be fairly arbitrary.