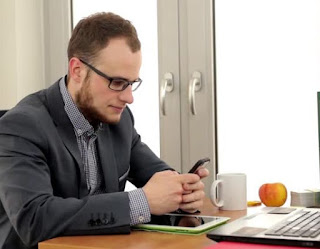 A recently published report suggested that American workers waste an average of 5% of their time each day.  Given a basis of 480 minutes, that suggests that the average worker fritters away 24 minutes every working day.

Diving into the details, the research was based on self-reporting, a notoriously inaccurate source of data.

According to THIS study the average American office worker spends 44 minutes checking social media each work day.  That is one category of nonproductive time use and it almost doubled the total self-reported number.  Add in 65 minutes for reading on-line news, 18 minutes of talking on the phone for non-work purposes, 14 minutes for texting and 26 minutes of looking for another job on-line and you can see that employers don't get very much out of their employees.

It is a quandary for employers.  The employer is in violation of federal statutes if they place a "blocker" in the workspace and the FCC will prosecute.  Case law demands that the employer demonstrate that the time spent doing tasks other than what the employer demands injures the employer.  How can paying somebody for eight hours while only receiving 3 hours of work not be injurious?  Somehow this eludes the Labor industry.