Shaking my head with disgust

For about half of my working career I worked in Product Engineering.  In the other half I worked in Manufacturing with an emphasis on quality.  Because my employer manufactured products that people sometimes misused and died while using, and because they were perceived as having deep pockets, they were a frequent target for litigation.

The company responded by sending many of us to a class titled "What every Engineer should know about Product Liability."  Some of the information stuck.

One of the restaurants in Eaton Rapids was recently remodeled.
I went in to check it out.

One of the additions was a bar that is about 42" above the floor.  Instead of chairs they had tall stools; stools with a narrow footprint and willowy structural members.

Looks can be deceiving so I up-ended one of the stools to see what was beneath the hood, so to speak.

The problem with warnings 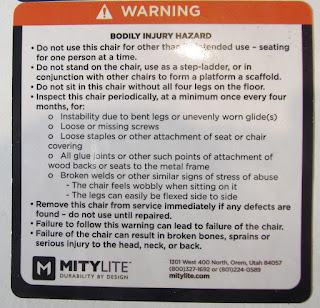 Posting a sign "Vicious dog.  Jumps fence and bites people." does not protect you from litigation.  For one thing, the pedestrian is in peril if they are close enough to read the sign.  Another thing is that the sign is evidence that you know that you have a dangerous dog and that you are a weasel who tries to scrape the blame off on innocent pedestrians.

Another line on this sticker reads "Inspect this chair...at a minimum of once every four months, for:
Instability due to bent legs (!!!) or unevenly worn glide(s)
.
.
.
Broken welds or similar signs of stress of abuse
-The chair feels wobbly when sitting on it.
-The legs can be easily flexed side to side."

One presumes that they have a history of bent legs and broken welds.

Just out of curiosity, let's look at those welds.  Out of a sample of three stools, multiple defective welds were found.  The most photogenic are shown in the next three images.

But wait....the restaurant is not off the hook...
Presumably some executive at the restaurant's national headquarters OKed the purchase of these stools.

That means the restaurant, a national chain, bought into  "Inspect this chair...at a minimum of once every four months"

It would be nice if this line of furniture was pulled before somebody gets hurt.

My guess is that some fat kid is going to topple over backwards out of one of these stools because the welds will break.  They will whack the back of their head against the tile floor and become a vegetable.  I also predict that a moderately competent lawyer will take the restaurant chain to court and procure a $6M settlement.

I also predict that the restaurant chain will assume it is a fluke and not pull the stools from service.  They will quickly find themselves fending off twenty or fifty similar suits in short order.  Stupid hurts.

If there are any lawyers or engineers out there in my readership I would love to have you comment.
Posted by Eaton Rapids Joe at 4:20 PM