Mil-Surp price and it comes with a scope 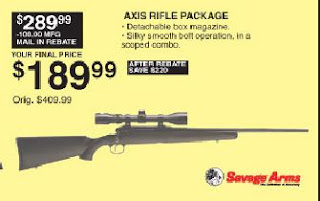 One of the local sporting goods chains is running a Black Friday sale.  I really don't need another gun but the price is unbelievable.  It is half the price tag I saw on 100 year old SMLE centerfire rifles, guns without scopes.

Mr Pepper's Winchester Model 37 is not firing like it is supposed to.  He is getting very light firing pin strikes.

Mr Pepper bought the gun in 1947 from an onion farmer.  Mr Pepper hoed onions for forty hours in exchange for the firearm.  If Mr Pepper's memory serves, the retail price of the gun was $15.  Over the intervening years he shot 11 bucks and untold numbers of raccoons and possum with it. 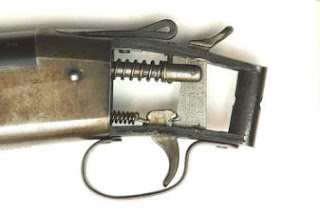 It is hard to imagine a simpler mechanism. 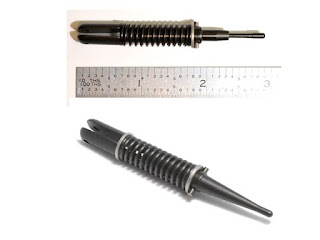 The firing pin comes in two variations.  Upon disassembly, we figured out that Mr Pepper's is the newer, i.e. the lower, firing pin.

One anomaly is that the spring compression washer at the back of the pin split so it now looks like a lock washer.  One of the corners of the fractures was riding on the body of the pin and may be the cause of the friction that is bleeding energy.

New pins cost between $40 and $50 depending on where you shop.  Washers are $3 but most of the on-line places have a $10 minimum order.

I suspect that I will be buying Mr Pepper a new, $40 firing pin for his Christmas present.
Posted by Eaton Rapids Joe at 6:27 AM